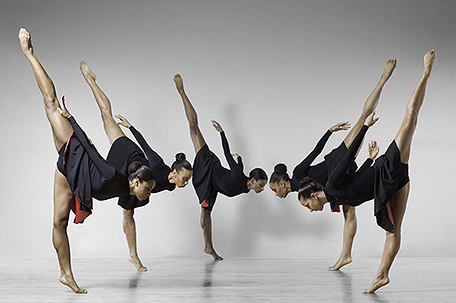 “I’m always looking for work that challenges my dancers, and this is even more demanding because of the structure of the work,” says Joan Myers Brown about the company’s premiere of Dove’s “Bad Blood.” “It’s about relationships, but a lot of the lifts are ‘death-defying’ and it requires the dancers to have the utmost trust in each other.”

“Under the direction of founder Joan Myers Brown, this company has talent, chutzpah, and energy to burn.”

Joan Myers Brown, founder of Philadanco, is the recent recipient of the 2012 National Medal of the Arts award presented by President Obama, and the 2013 Dance USA Honor Award for extraordinary leadership and vision in Dance.

Beloved by audiences worldwide, Philadanco brings their passion and high-spirited movement to stages around the globe for 40 weeks each year.  In 2015, Philadanco will tour the “James Brown: Get on the Good Foot” project in Europe for five weeks with performances scheduled in Germany, Hungary, Switzerland and the Netherlands (February-March 2015).  This new work made its world premiere at the Apollo Theater in New York City (October 2014), and has been performed this season in Lafayette, Louisiana, where Philadanco stayed for a two-week residency, as well as at The Rialto Theater in Atlanta, Georgia and The Music Center’s Ahmanson Theater in Los Angeles, California.

Tickets for Philadanco are available at $29 to $46, and can be purchased by calling 215-893-1999, online at kimmelcenter.org, or at the Kimmel Center Box Office located on Broad and Spruce streets, Philadelphia, Pa. (open daily from 10am to 6pm, later on performance evenings).

One of the most innovative choreographers of our time, Ulysses Dove’s work has premiered at the New York City Ballet (”Twilight,” “Red Angels,” 1994), as well as with world renowned companies, such as the Dutch National Ballet, the Basel Ballet, American Ballet Theatre, London Festival Ballet, and Groupe de Recherche Choreographique de l’Opéra de Paris, where he spent three years as assistant director (1980-1983).  A former Alvin Ailey American Dance Theater dancer (1973-1980), upon Ailey’s influence Dove made his first choreographic debut in 1979 with “I see the moon…and the moon sees me,” followed by the creation of “Inside,” a solo dedicated to Judith Jamison, whose performance of the piece she has described as ‘’one of the hardest pieces I’ve ever done” (NY Times). The Ailey company has interpreted his works “Night Shade” (1982), “Bad Blood” (1984), “Vespers” (1986) and “Episodes” (1987), all works that define Dove as brandishing speed, force and eroticism in dance.  Originally a South Carolina native, Dove gave up his premed studies at Howard University to study with Xenia Chlistowa of the Kirov Ballet at the University of Wisconsin, and then graduated from Bennington College with a degree in dance.   Upon moving to New York City, Dove performed with Mary Anthony, Pearl Lang and Anna Sokolow.  In 1970, he joined the Cunningham Company after receiving a scholarship at the Merce Cunningham School. Dove passed away in 1996, and has been continuously revered for his explosive, forceful dances he brought to the stage.