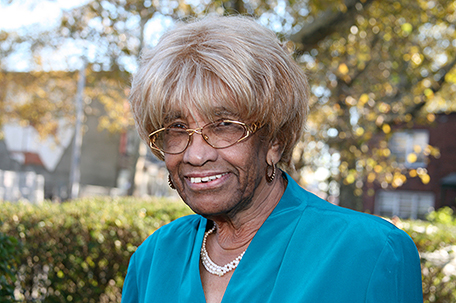 The Philadelphia Housing Authority (PHA) is mourning the loss of former Commissioner Nellie Reynolds, a champion of hope who devoted herself for more than 50 years to advancing justice and improving the quality of life for Philadelphia’s public housing residents. Ms. Reynolds, who was 96, passed away over the weekend.

“Ms. Reynolds was like a second mother to me,” Kelvin A. Jeremiah, President and CEO of the Philadelphia Housing Authority said. “I am grateful for her wisdom and her sage counsel. She reminded everyone, including me, that they are here to make a difference.  She was a voice for the unheard and marginalized, when she successfully advocated that public housing residents be given a voice in HUD-assisted programs and policies.”

Jeremiah added that Reynolds’ impact was phenomenal, inspirational, and lasting.

In 1968, Reynolds engaged in actions that led to the establishment of what is now the Resident Advisory Board, which became the first tenant council in the country. Today there are hundreds of such organizations, giving residents a strong voice on governance issues related to low-income housing developments.

Additionally, she fought other key battles, including one that led to the construction of Whitman Park at 2nd Street and Oregon Avenue, now situated in a formerly all-white section of South Philadelphia. That development would become an historic symbol in the city’s struggle for racial integration and justice.

A resident of Johnson Homes since she was a youngster, Reynolds was appointed as Commissioner to the PHA Board in 1984. There she pushed to advance tenant rights and provided them with a voice in governance.

Commissioner Reynolds served as a PHA Commissioner for 26 years and as Vice Chairman of the Board from 1990 until 2010, when the entire PHA board resigned. Ms. Reynolds was then appointed resident liaison by HUD, a position she held until PHA returned to local control in 2013.

“PHA has lost an icon with the passing of Nellie Reynolds,” said Lynette Brown-Sow, Chair of the PHA Board of Commissioners. “ I’ve always looked up to her for her willingness to stand up for what is right for our community. She was my mentor and I’m personally committed to do my part to carry the torch. We relied on former Commissioner Reynolds for her experience and for the insights gained through the years as a resident leader. My heartfelt condolences go out to her family.”

Indeed, it was Ms. Reynolds who suggested that the PHA Police Department recruit public housing residents or former residents to the force, and her suggestion became reality in August 2013. The idea was and is a community-policing model, which ensures greater communication and better relations with the residents, city and the broader community.

For many years, Ms. Reynolds had been a trustee on the Community Legal Services Board and a member of the Welfare Rights Organization. Commissioner Reynolds also served on the board of the Housing Association of the Delaware Valley and as an Emeritus member on the Urban Affairs Coalition’s board.

She worked on behalf of the homeless and served as a member of the National Tenant Organization, CEO of the Resident Advisory Board, and as a member of Zion Baptist Church. Ms. Reynolds also served on the Democratic Election Committee for 50 years for the 32nd Ward, where she was chairwoman.

“Nellie Reynolds has had a remarkable life and impact on residents,” Jeremiah said. “I’d like to honor her and her legacy by naming the Philly SEEDs Scholarship in her name, as a lasting tribute to her, and provide every recipient with a biography of her as part of the scholarship award so that they know on whose shoulders they stand.”

Commissioner Reynolds once said she wanted to be known as a caring mother and a person who fought to get doors open for PHA residents and it’s clear that she did.