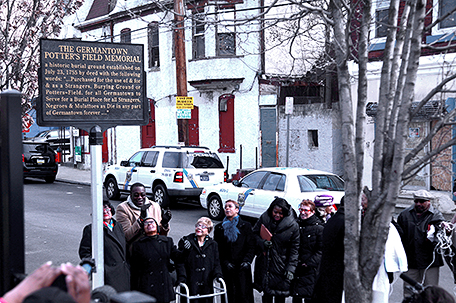 ABOVE PHOTO:  The Philadelphia Housing Authority unveiled a historical marker at its Queen Lane development. The marker recalls a time when part of the site was used as a Potter’s Field by “strangers, Negroes, and Mulattoes who died in any part of Germantown forever.”

In a lasting tribute to some of the early residents of the historic Germantown neighborhood, the Philadelphia Housing Authority (PHA) unveiled a historical marker at its Queen Lane development. The marker recalls a time when part of the site was used as a Potter’s Field.  It notes that a historic burial ground was established on July 23, 1755 by deed to serve as “the resting place for all strangers, Negroes, and Mulattoes who died in any part of Germantown forever.”

“We fulfilled our promised to show respect for this sacred site,” said PHA President and CEO Kelvin A.  Jeremiah. “I would like to thank the Department of Housing and Urban Development, Councilwoman Cindy Bass, Queen Lane Resident Council President Corliss Gray and the entire community for working with us to ensure that we remember our history and honor those who came before us, on whose shoulders we proudly stand.”

“This marker gives due respect to the site that served as the final resting place for many free and enslaved black men, women and children and, more importantly, recognizes these early citizens as part of the fabric of our city,” said Councilwoman Bass who represents the residents of the neighborhood.

The redevelopment of Queen Lane, first publicly announced in July 2011, was delayed when concerns were raised about a potter’s field that once occupied a portion of the site. In January 2014, PHA signed a “Programmatic Agreement” with the Department of Housing and Urban Development (HUD), the State Historic Preservation Officer (SHPO), and the Advisory Council on Historic Preservation (ACHP). The agreement governed the way the site was redeveloped. Included in the agreement, was a commitment by the housing authority to post a historical marker that memorializes the site.

During the redevelopment of the former high-rise site, an archaeologist was on hand or readily available during the entire process to ensure that any historic resources were documented and preserved. PHA acted so that no new construction occurred within the known boundaries of the potter’s field as identified by archaeological investigations. Those same investigations recovered approximately 6,000 artifacts. They were mostly domestic in nature, and included ceramics, glass, animal bones, architectural items, and personal items such as smoking pipes and fragments of musical instruments.

The new development covers the entire square block bordered by Penn Street on the north, Queen Lane on the south, Priscilla Street on the west, and Pulaski Avenue on the east.  As additional replacement housing, PHA acquired Queen’s Row Apartments, located nearby in the 500 block of West Queen Lane, and rehabbed the 29-unit site.