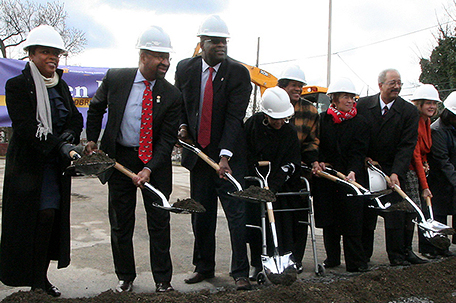 The Philadelphia Housing Authority (PHA) is making monumental progress in its efforts to revitalize Philadelphia’s Germantown neighborhood.  PHA held a groundbreaking for the new Queen Lane Apartments recently at 301 W. Queen Lane.  The new development will be constructed on the former site of a 1950s high-rise that was imploded by the housing authority in September.

This new, $22 million development will contain 55 affordable rental units and will be in character with the surrounding neighborhood.  The green space that served as the former Potter’s Field will also provide drainage that reduces the strain on the city’s infrastructure.  The site will also have a community room and a management office with meeting rooms, all of which will be handicapped-accessible.

“PHA is delivering on its commitment to have affordable housing on the Queen Lane site and to being a partner in revitalizing this Germantown neighborhood,” said PHA President and CEO Kelvin A. Jeremiah. “We know the Queen Lane neighborhood will benefit from the construction of new, modern affordable housing that matches the existing housing designs.  The history and the memory of those souls formerly buried at the site will be recognized.  We are honoring our past while building for the future in this historic neighborhood.”

“Germantown is one of our City’s vibrant and storied neighborhoods, and this investment in affordable housing will further strengthen our City,” said Mayor Michael A. Nutter.  “The City’s housing agencies are working closely with PHA to expand our housing infrastructure in a style that is appealing to Philadelphians and one that fits into our neighborhoods.  And I want to give praise to Mr. Jeremiah for the collaborative and sensitive way in which PHA has worked with the community in Germantown.”

The new Queen Lane complex will be a mix of two-story flats, walk-up apartments, and three-story townhouses.  The new apartments will use the entire square block bordered by Penn Street on the north, Queen Lane on the south, Priscilla Street on the west, and Pulaski Avenue on the east.  As additional replacement housing, PHA acquired Queen’s Row Apartments, located nearby on Queen Lane, and is in the process of redeveloping the 29-unit site.

“This has been a long time in the making, and I’m happy to see PHA invest in Germantown and bring quality affordable housing to the community,” said Councilwoman Cindy Bass, who represents the neighborhood.  “I appreciate how integral the community has been in this process and I look forward to seeing the years of ideas and conversations come together.”

PHA expects that construction of the new Queen Lane Apartments will be complete by next December. The development is located near the Germantown Avenue retail district and is easily accessible to a variety of educational and transportation services, including SEPTA bus routes and the Queen Lane Regional Rail station.