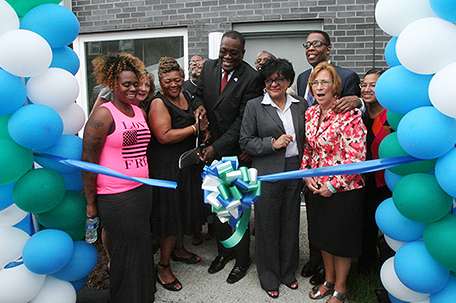 The Philadelphia Housing Authority (PHA) has changed the landscape at the northern edge of the Strawberry Mansion neighborhood, converting a long vacant piece of land and putting it to productive use.  The agency, joined by elected officials, celebrated the grand opening of the Oakdale Street Apartments today.

The 12-unit development on the 2800 block of West Oakdale Street is located across the street from the Widener Library. It contains eight two-bedroom townhouses and four one-bedroom duplex units ranging from just over 700 to more than 1,200 square feet.  The Oakdale Street Apartments are designed with sustainability and low energy usage in mind; the site features Energy Star rated appliances and mechanical equipment, and compact fluorescent bulbs throughout.  All of the buildings feature conventional construction with a combination of brick and hard board panel systems on the exterior, with grass field rear yards.

“This event marks the completion of the first of three projects planned for the Strawberry Mansion community, which represents an investment of over $25 million by PHA.  We hope that this work encourages others to invest in quality, affordable housing here, whether through new construction or renewal,” said PHA President and CEO Kelvin A. Jeremiah. “Oakdale Street, and developments like it, would not have been possible without the support of Mayor Nutter, Council President Clarke, and the residents of this community.”

“Today we take an important leap forward toward the rebirth of historic Strawberry Mansion. It is wonderful to see new quality, affordable housing that will attract families and investment to this community,” Council President Darrell L. Clarke said. “Once again, PHA under the leadership of Kelvin Jeremiah is demonstrating a strong commitment to targeted reinvestment that will benefit neighborhoods and make our City stronger.”

Clarke, whose district includes Strawberry Mansion, had long sought this development and has vigorously promoted an increase in various forms of affordable housing throughout Philadelphia.

Oakdale Street Apartments is the first of three PHA developments planned for the Strawberry Mansion neighborhood. When all of the developments are complete, 100 new housing units will have been added to the neighborhood.

The construction of Oakdale has already created job opportunities for the community. Eighty-six people in total were hired during development; 65 of them were Section 3 hires, where economic opportunities are given to low and very low-income persons who are public housing residents or who live in an area where a HUD-assisted project is located. Of those 65 hires, ten people were from PHA.

PHA invested a total of $4.63 million for Oakdale Street.