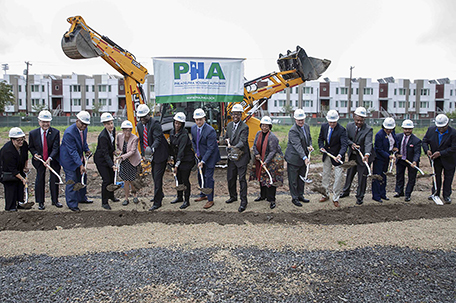 The Philadelphia Housing Authority (PHA) and the City of Philadelphia celebrated the start of construction for Norris Apartments Phase III at a groundbreaking today in the city’s North Central neighborhood. The development represents the third of five phases developed following the award of a $30 million Choice Neighborhoods Implementation grant to the City of Philadelphia and PHA by the U.S. Department of Housing and Urban Development (HUD) in June 2014.

“We’re thrilled to see the renewal of this neighborhood as we work toward building a stronger, safer, more vibrant and sustainable community,” said PHA President and CEO Kelvin Jeremiah. “The Choice Neighborhoods Implementation grant that is making this and other redevelopment activities possible is one of the most significant investments in affordable housing by the federal government in recent years.”

PHA and the City of Philadelphia were awarded a $30 million Choice Neighborhoods Implementation Grant by HUD in June 2014 to revitalize the North Central neighborhood. A series of community meetings identified a number of resident priorities: more job training and opportunities; reduced crime and increased neighborhood safety; elimination of trash-strewn vacant land; and high-quality educational resources. The North Central Philadelphia transformation plan will address all of these areas of concern.

“This groundbreaking is an exciting step forward for Philadelphia,” Sen. Casey said. “I was proud to support this project from the start and pleased that the U.S. Department of Housing and Urban Development chose to invest in the City. I look forward to the project’s completion and the resulting economic growth, job creation and new affordable housing.”

“Norris Phase III — and the Norris Development overall — is a great example of the kind of great outcome the City and PHA can accomplish together, especially when we listen to the community for what they think a choice neighborhood should include,” said Mayor Jim Kenney. “I congratulate  PHA and all of the entities and City departments who put so much effort into this venture.”

“This collaborative, community-driven effort to build a truly inclusive Philadelphia is possible in great part because of the Choice Neighborhoods grant. I want to thank again our partners at the state and federal levels who helped us bring these investments home so that North Central Philadelphia may thrive,” said City Council President Darrell Clarke. “This is what happens when all government aligns for one goal to serve the people.”

“The residents here just want to come out of their apartments and be proud of their neighborhood,” said Norris Resident Council President Donna Richardson. She worked with officials on the successful grant application.

Norris Phase III consists of 50 newly constructed rental units. It will partially replace a low-rise development that dated back to late 1959 and early 1960, and which has become obsolete. The development covers an area generally bounded by Marvine Street to the west, 11th Street to the east, West Norris Street to the south, and a new subdivision line about 80 feet south of Diamond Street.

To obtain the grant, the City worked with more than forty partners, including the School District of Philadelphia, Temple University, the Philadelphia Housing Authority (PHA), the Philadelphia Police Department, local leaders and community stakeholders through the Office of Community Housing and Development to create the resident-driven North Central Philadelphia transformation plan.

The new development has high sustainability goals and will seek certification from LEED, EnergyStar Homes and Enterprise Green Communities. Ultimately, five phases of construction will take place in the North Central neighborhood over five years with the creation of 267 rental units and 30 homeownership units.