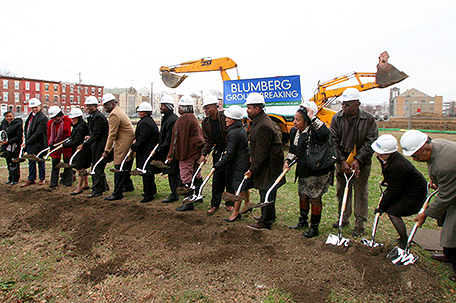 ABOVE PHOTO:  The Philadelphia Housing Authority (PHA) has initiated the redevelopment of a 13-story high rise senior building—the only building left standing after the demolition of the rest of the Blumberg Apartments.  This marks the latest stage of the Choice Neighborhood Transformation Plan for the Sharswood/Blumberg neighborhood. The authority has also begun street work to break up the old Blumberg superblock by by reintegrating the site into the City’s streetscape by building one new street and connecting two other existing streets.

The Philadelphia Housing Authority (PHA) has initiated the redevelopment of a 13-story high rise senior building — the only building left standing after the demolition of the rest of the Blumberg Apartments.  This marks the latest stage of the Choice Neighborhood Transformation Plan for the Sharswood/Blumberg neighborhood.

The authority has also begun street work to break up the old Blumberg superblock by by reintegrating the site into the City’s streetscape by building one new street and connecting two other existing streets.

“The rehabilitation of the Blumberg Senior Apartments into high quality, modern affordable housing is a key component of the Choice Neighborhood Initiative transformation plan,” said PHA President and CEO Kelvin A. Jeremiah. “All former residents of this high-rise have the right to return to the neighborhood once work is completed. The redesigned street pattern is essential to creating a walkable, beautiful, and safe neighborhood.  I extend my deep appreciation to Mayor Jim Kenney, Council President Darrell Clarke, Anne Fadullon, Commissioner Debra McCarty and their staffs for their ongoing support and assistance on this important transformative project.”

All 94 of the senior units will be converted from public housing to Project Based Vouchers under HUD’s Rental Assistance Demonstration Program (RAD).  As part of RAD, the Development will include a 20-year Project Based Voucher Housing Assistance Payment (HAP) contract. At least 10 percent of the units will be reserved for seniors earning 20 percent of the Area Median Income (AMI) or less.  Under the HAP contract, tenants will not be responsible for utilities supplied to their unit. 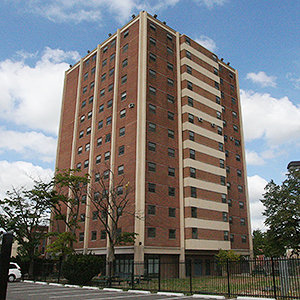 Still photo of the senior building that will be remodeled.

“I want to congratulate PHA and the Water Department for working together on the plan for the new streets that will pass through this site.  The new streets and the senior building are yet further examples of the great outcomes that happen when the City and PHA collaborate,” Mayor Kenney said.

“The City of Philadelphia continues to make strategic investments toward making every neighborhood a community of choice,” City Council President Darrell L. Clarke said. “I’m grateful to PHA, the Water Department, and all of the partners here who are working with Sharswood/Blumberg residents to help them build the attractive, affordable, walkable, and sustainable community they want for themselves and for future generations.”

The redesign of the street pattern follows “Green City, Clean Waters,” the Philadelphia Water Department’s plan to reduce storm water pollution from entering the city’s combined sewer system through the use of green infrastructure. The program was initiated in 2011 as a result of a 25-year agreement with the Pennsylvania Department of Environmental Protection and the U-S Environmental Protection Agency.

The reduction of storm water that flows into Philadelphia’s combined sewer system lessens the number of sewer overflows that degrade the city’s waterways. The “green streets” model is cost effective and minimizes the need for water rate increases.

“The Water Department is excited to partner with Philadelphia Housing Authority on the first of its kind Green Streets project for an affordable housing development.” said Water Commissioner Debra McCarty.  “The addition of three blocks of green streets to manage stormwater nicely complements the stormwater management practices being installed in compliance with the Department’s stormwater regulations, all of which contribute to protecting our waterways from pollution.  We look forward to continuing to partner with PHA on many more green projects.” 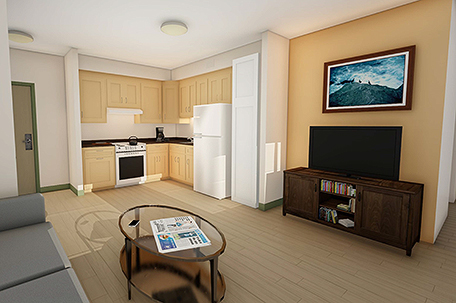 Renderings of the work to be done.

The reconnected 23rd Street will have dedicated parking lanes and be wide enough to accommodate bus service. Neighborhood residents want SEPTA bus service restored along North 23rd Street.  Current routes that serve the neighborhood are generally along nearby commercial corridors and major thoroughfares, so accessibility is more constrained in the center of the neighborhood planning area. PHA will also install lights on the new streets that will improve pedestrian and neighborhood safety.  New concrete sidewalks will be built while the new streets will have an asphalt surface.