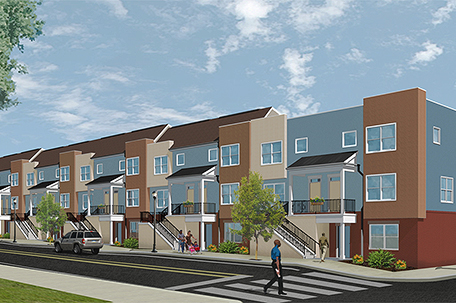 The Philadelphia Housing Authority will accept applications for the new Queen Lane Apartments from Monday, October 5 through Friday, October 9.

People who apply to live at Queen Lane are subject to criminal background checks. They should also be prepared to provide dates of birth and Social Security numbers for all household members. Income restrictions do apply, ranging from $28,550 for one person to $40,750 for families of four.

The new Queen Lane Apartments features one, two, and three bedroom units with washers and dryers, central air conditioning, and a modern kitchen with Energy Star appliances and garbage disposal. Six of the units at the development are accessible while two of them are for the hearing/visually impaired.

The new development is located near the Germantown Avenue retail district and is easily accessible to a variety of educational and transportation services, including SEPTA bus routes and the Queen Lane Regional Rail station.

Construction of the new low-rise development at 301 W. Queen Lane Avenue which began last December will be completed this December. The redeveloped site will use the entire square block bordered by Penn Street on the north, Queen Lane on the south, Priscilla Street on the west, and Pulaski Avenue on the east. A former potter’s field fronting on Queen Lane will be maintained as open space.

The potter’s field, which fronts the new development as open space, will have a historic marker. PHA signed a “Programmatic Agreement” that protects the site with the Department of Housing and Urban Development, the State Historic Preservation Office, and the Advisory Council on Historic Preservation. A number of other neighborhood groups are also signatories to the agreement.