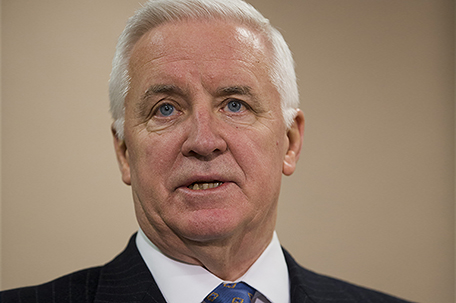 Opponents call it “flip-flopping,” but “changing positions” might be a more neutral description. Regardless, either term is about as popular with practicing politicians as term limits and root canals. The political cognoscenti’s preferred locution today is “evolvement” as in “my views have evolved on that question.”

Consequently, pols never acknowledge flip-flopping, of any sort, and only rarely admit they have changed their minds about anything. They evolve.

As the long, historic 2014 gubernatorial race stretches out in front of us, one very pertinent question is whether Pennsylvania Gov. Tom Corbett is “evolving” on issues that might decide the race? If so, on what issues?

Answering this straightforward question is surprisingly hard. That’s because Corbett entered big league politics as something of a blank slate. Unlike other governors in modern times, his views were not forged in the fires of numerous campaigns or worked out in the give-and- take of a long career in electoral politics.

Instead, when Corbett first entered gubernatorial politics in the 2010 campaign there was scant history to predict his future policies. Except for some service as a local township official, Corbett had been a career prosecutor, serving a partial appointed term as attorney general in the 1990’s, followed by two elected terms beginning in 2004. These experiences provided little discussion of the big policy issues that confronted the state.

Corbett had been a campaign advisor to Gov. Tom Ridge, persuading many that Corbett’s views mirrored Ridges. That assumption was strengthened when Ridge appointed Corbett to an interim vacancy in the attorney general’s office in 1995. He appeared to be in the long line of moderate Republican governors going back to William Scranton in the 1960’s. They were more or less pragmatic, centrist Republicans that governed by seeking consensus and compromise.

Running in the 2010 Tea Party year, Corbett ran as a staunch conservative, sporting a privatization agenda no governor in modern times has articulated while passionately arguing that no taxes or fees of any kind would be increased, if he was elected.

For most of his tenure he was good to his word. He managed the $4.2 billion deficit handed to him by huge cuts to school districts, county human services and public higher education – fiercely eschewing tax increases. He pushed privatization of state lottery management, privatization of state liquor stores, and restructuring of state workers and teachers pensions.

Alas, all of this has not worked out well for him with voters as he seeks reelection to a second term. His job approval rating now stands at a stunningly low 23 percent with less than one in four voters believing he deserves to be reelected. Nationally, he is considered to be among the most endangered incumbents in the country, almost universally believed to be in a fight for his political life.

Recently, however, there is indication that Tom Corbett’s seemingly rock solid conservative ideology is undergoing a do-over. Embattled as he is, Corbett seems to be moving toward the traditional centrist terrain of successful Pennsylvania governors.

Evidence of Corbett’s evolution is found in at least five key policy areas.

EDUCATION: Corbett’s new budget proposes an overall spending hike of 3.3 percent including some $341 million in increased education funding, as well as the first increase in special education funding in six years.

HIGHWAYS: He signed a $2.3 billion transportation bill, setting the stage for a rise in gas prices while increasing licenses and vehicle registration fees.

DISCRIMINATION: Despite once gauchely comparing gay marriage to incest, Corbett now supports making it illegal to discriminate in housing and employment based on sexual orientation or gender identity.

So, if evolution is a slow, adaptive process, Corbett’s slow progress toward the center probably qualifies. The real question becomes whether it is enough to help him politically – or is he evolving too little, too late?

To Corbett’s advantage, it is still early in an election year. Certainly the now lopsided gubernatorial race will tighten.

Nevertheless, Corbett may have run out of time. For three years he has governed mostly as a principled conservative, committed to policies designed to reduce the size and scope of government. These policies have rendered him the most precariously situated incumbent in modern state history.

Thus an election year conversion may not be enough to change voters’ minds about him. Far too many voters disapprove of the job Corbett has done and believe he does not deserve to be re-elected.  Incremental change in the policies he has championed for three years seem unlikely to change that.

Evolution brings change slowly and indeed Corbett is slowly changing. The question now is whether slow change is fast enough to get him another term.

Politically Uncorrected™ is published twice monthly, and previous columns can be viewed at http://politics.fandm.edu. The opinions expressed in this article are solely those of the authors and do not necessarily reflect the opinions of any institution or organization with which they are affiliated. This article may be used in whole or part only with appropriate attribution. Copyright © 2014 Terry Madonna and Michael Young.