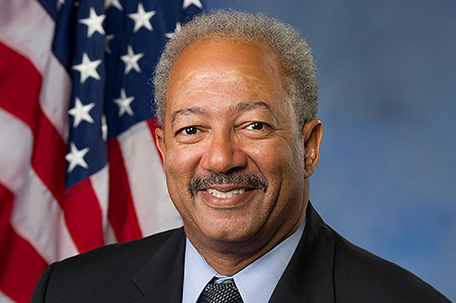 U.S. Rep. Chaka Fattah paid off an illegal $1 million campaign loan with federal grants and charitable donations, funneled campaign funds toward his son’s student loans and disguised a lobbyist’s bribe as payment for a Porsche his TV anchor wife never sold, prosecutors said Wednesday in announcing a racketeering indictment against him.

The 11-term Democrat from Philadelphia led a conspiracy that engaged in bribery, fraud, money laundering and other crimes and netted him hundreds of thousands of dollars, federal investigators said.

The indictment describes four schemes, two involving efforts to erase debts from Fattah’s failed 2007 mayoral bid. The U.S. Department of Justice charged that Fattah used federal grants and donations to his educational foundations to pay back part of the wealthy donor’s $1 million loan.

“This isn’t Deflategate,” he said. “I’ve never been involved in wrongdoing, any unlawful activity (or) any misappropriation of federal funds.”

Fattah vowed to remain in office and fight the charges but stepped down from his leadership post as the top Democrat on the House Appropriations subcommittee that oversees spending for Commerce, Justice, Science and related agencies.

House Minority Leader Nancy Pelosi, D-Calif., said the charges “are deeply saddening” but said she would not ask him to step down. She called him “a tireless and effect advocate for America’s hard-working families.”

Fattah, 58, was not arrested, and no court date was set for his initial appearance.

The case had already ensnared two former aides, who have pleaded guilty to charges linked to Fattah’s campaign debt, and his namesake son, who awaits trial on an overlapping case that includes charges he misspent $930,000 in federal education funding.

Fattah said that “subpoenas have been flying” around him for at least eight years. He has nonetheless maintained a busy public schedule, catching a ride to a Philadelphia event this month with President Barack Obama on Air Force One.

Fattah became an early political activist after being raised by a mother who turned the family row house into a haven for teen gang members. He became a state representative at 25, a state senator at 30 and the successor to esteemed former Rep. Bill Gray at 37.

The indictment also said the Democrat and his district director, Bonnie Bowser, passed mayoral and congressional campaign funds through a political consulting company to make 34 student loan payments on behalf of his son totaling $23,000.

Fattah’s wife is accused of helping hide an $18,000 bribe from a lobbyist through a sham sale of her 1989 Porsche. Renee Chenault-Fattah, who is not charged in the case, is on leave from the NBC affiliate in Philadelphia, the station announced Wednesday.

The couple used money from the purported car sale to help get a mortgage for a Poconos vacation home, the indictment said.

Vederman’s lawyer said he would plead not guilty and fight the charges.

“The government has cherry-picked facts to support its cynical view of friendship and wrongly labeled it bribery,” lawyer Catherine Recker said.

A former member of Fattah’s congressional staff and the CEO of his Educational Advancement Alliance, Karen Nicholas, obtained $50,000 in federal grants for a higher-education conference that never took place, authorities said.

Instead, they said, Nicholas used the money to pay a political consultant, an attorney and several checks to herself from the charity’s operating account.

Fattah is the second sitting federal lawmaker to be indicted this year on corruption charges. New Jersey U.S. Sen. Bob Menendez, also a Democrat, was indicted on federal corruption charges less than four months ago; he denied the allegations.