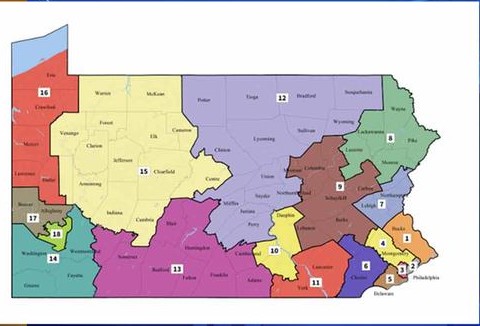 HARRISBURG, Pa. –Pennsylvania’s high court issued a new congressional district map for the state’s 2018 elections on its self-imposed deadline on Monday, potentially giving Democrats a boost in their quest to capture control of the U.S. House unless Republicans are able to stop it in federal court.

The map of Pennsylvania’s 18 congressional districts is to be in effect for the May 15 primary and substantially overhauls a congressional map widely viewed as among the nation’s most gerrymandered. The map was approved in a 4-3 decision, with four Democratic justices backing it and one Democratic justice siding with two Republicans against it.

Democrats quickly cheered the new map, which could dramatically change the predominantly Republican, all-male delegation elected on a 6-year-old map.

“It remedies the outrageous gerrymander of 2011, and that’s the important thing, that the gerrymander be over,” said David Landau, the Democratic Party chairman of Delaware County, which was ground zero for the “Goofy Kicking Donald Duck” district. “All that zigging and zagging is all gone, and it makes Delaware County a competitive seat now.”

Republican lawmakers are expected to quickly challenge the map in federal court, arguing that legislatures and governors, not courts, have the constitutional responsibility to draw congressional maps.

Meanwhile, sitting congressmen, dozens of would-be candidates and millions of voters have to sort out which district they live in barely a month before the candidates’ deadline to submit paperwork to run. Petitions are due March 20, a two-week delay to accommodate the redrawing process.

Democratic Gov. Tom Wolf, who had backed the court’s decision to throw out the 6-year-old map, called the court’s map an “effort to remedy Pennsylvania’s unfair and unequal congressional elections.” He said his focus would become ensuring that his administration update the state elections bureau’s systems and ensure processes are in place to help candidates.

The decision is the first time a state court threw out congressional boundaries in a partisan gerrymandering case and handed a victory to the group of registered Democratic voters who sued last June in a lawsuit backed by the League of Women Voters.

Candidates can start circulating petitions to run in their new district in a little over a week, Feb. 27. Pennsylvania has seen a surge in interest in running for Congress with six incumbents elected in 2016 not running again – the most in four decades – and Democrats vehemently opposing President Donald Trump.

Pennsylvania’s Republican delegation has provided a crucial pillar of support for Republican control of the U.S. House since 2010.

Republicans who controlled the Legislature and the governor’s office after the 2010 census crafted it to elect Republicans and succeeded in that aim: Republicans won 13 of 18 seats in three straight elections under the now-invalidated map, even though Pennsylvania’s statewide elections are often closely divided and registered Democratic voters outnumber Republicans.

The new map will not apply to the March 13 special congressional election in southwestern Pennsylvania’s 18th District between Republican Rick Saccone and Democrat Conor Lamb.