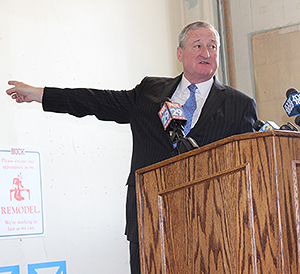 HARRISBURG, Pa. (AP) — Pennsylvania’s primary election will decide nominees or officeholders for several high-profile offices, including mayor of the nation’s sixth largest city and one of the state’s 18 members of the U.S. House.

Pennsylvania’s primary election is May 21.

It features primary elections for Philadelphia mayor and two statewide appellate court seats. It also features special elections to fill three open seats in the Legislature and one in Congress.

Democrat Jim Kenney is running for reelection as mayor of the nation’s sixth largest city.

He has had an eventful first term, from antagonizing President Donald Trump over Philadelphia’s sanctuary city status — and winning an appeals court decision against the Trump administration’s effort to punish the city — to carrying through on his top first-term priority. That priority, a 1.5 cent-per-ounce tax on soda and other sweetened beverages, drew national attention.

It also has drawn criticism but withstood court challenges and a public relations onslaught by grocers and the beverage industry. The money is funding new pre-kindergarten slots and services for schoolchildren and their families, with plans to fund parks, recreation centers and libraries.

He is opposed in the Democratic primary by two longtime city political figures: Alan Butkovitz, the former city controller defeated in 2017, and state Sen. Anthony Williams, who has served three decades in the state House and Senate combined.

Both men are critical of the soda tax and say Kenney has not attacked other problems plaguing the city, including crime.

Republican Billy Ciancaglini is running unopposed in the GOP primary.

There are two open spots on the state Superior Court, Pennsylvania’s mid-level appellate court, which handles civil and criminal appeals from county courts. Running for those spots are three candidates from each party.

The Democrats are Philadelphia Judge Daniel McCaffery and lawyers Amanda Green-Hawkins, of Pittsburgh, and Beth Tarasi, of Allegheny County. A fourth Democrat who filed paperwork withdrew from the ballot.

Republican Fred Keller and Democrat Marc Friedenberg are vying to fill the remaining term of Republican Tom Marino, who resigned in January, just three weeks into his fifth congressional term.

Keller, a fifth-term state representative, beat 13 other candidates seeking the GOP nomination in the heavily Republican district. Friedenberg, a lawyer and Penn State information technology instructor, was the only Democrat to seek his party’s nomination.

The current term ends in January 2021. The 12th District covers all or parts of 15 counties, including Keller’s home in Snyder County and Friedenberg’s home in Centre County. The district is also a strong source of support for Trump. Voters there backed the Republican in 2016′s presidential election by better than 2 to 1 over Democrat Hillary Clinton.

In the state House, the fifth-term Keller is largely a back-bencher and one of the most conservative members, with a 90 percent lifetime rating by the American Conservative Union through 2018.

Before he ran for the Legislature, Keller was a plant manager for a wood cabinet supplier and ran a real estate management business.

Pennsylvania’s primary elections are closed, which means only registered Republicans may vote in Republican primaries and likewise for Democrats. The last day to register to vote or change party affiliation before the May 21 primary election was April 22. Applications submitted after that date will be processed the day after the primary election.