Pennsylvania House Democrats in the running for leadership role 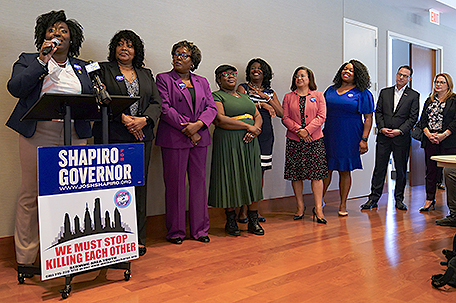 The Pennsylvania House Democrats are ready to tackle new challenges, hopefully as the majority, after a contentious electoral campaign season.

Republicans had their sights set on Pennsylvania as Ground Zero for their nationwide post midterm election challenge campaign.

Still, the state House Democratic caucus held, and was boosted by wins by U.S. Senator-elect John Fetterman and Governor-elect Josh Shapiro’s wins — a key factor in confronting a strong Republican caucus should they continue as a minority in the state Legislature after all the races are called. The governor-elect’s veto pen would also protect some of their important gains over the last eight years.

However, if they do flip the House, it will be the first time in over 10 years that they will have done so.

On Election Day, Rep. Jason Dawkins (D-179th Dist.), chairman of the Philadelphia Delegation in the House, was prepared for either outcome.

“I believe that the House has an opportunity to potentially get closer to the majority here in Harrisburg,” Dawkins told the SUN on Tuesday before the polls closed. “However, if we are unable to secure the full vote to take over that particular space, I believe we have to get serious about how do we have a different message in a minority space versus a majority space to ensure the protection of our people, and that is something that we cannot delay. That is something that we have to be very, very diligent about and put aside all partisan politics to ensure that outcome is met.”

It appeared that the Democrats were in the lead by Wednesday afternoon.

Given the high turnout and strong performance of Democrats on top of the ballot, Rep. Leanne Krueger (D-161st Dist.), chair of the House Democratic Campaign Committee, expressed confidence that the Democrats would indeed win a majority in the State House after all the votes are counted during a press conference in Philadelphia.

This positive outcome is the result of a focused effort that began back in the summer of 2021, she said.

“We made sure that we ran these campaigns and recruited candidates in a district-by-district fashion, because our commonwealth is diverse,” she said. “Issues are not universal, and they vary from community to community across this commonwealth. As Democrats, we believe that our diversity is our strength and we have been working hard to make sure that all of our communities have representation in Harrisburg.”

Krueger said traditional campaign strategies such as knocking on over one million doors contributed to their success.

“Our candidates and our incumbents did an amazing job talking to voters, one by one, face to face at their doors to help cut through the millions of dollars of negative campaign ads that were meant to stoke people’s fears, and they made a personal connection,” she said.

Should the numbers remain as they are now, House Democratic Leader, Rep. Joanna McClinton (D-191st Dist.) will become the first woman speaker of the Pennsylvania House.

After decades of gerrymandered maps, it turns out that 50% of Pennsylvania voters tend to vote for Democratic Party candidates, McClinton said.

“It’s an amazing thing what a fair opportunity and fair maps and fair districts will provide,” she said. “It’s going to provide the ability to have the changes we need today.”

As the minority party in the House, the Democratic Caucus has managed to hold together, said Rep. Jordan Harris (D- 186th Dist.), the Democratic Whip. He expects them to remain strong in the majority, even if it is a slim majority.

However, whether in the minority or majority, it’s a matter of discipline, Harris said.

As of press time, votes were still being tabulated.