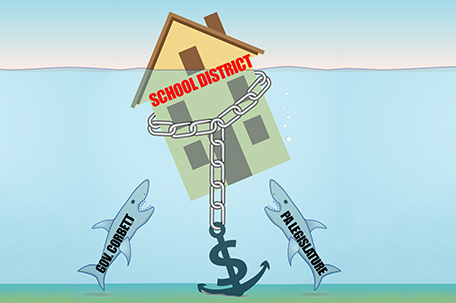 Gov. Tom Corbett is giving the School District of Philadelphia the mother of all Payday Loans…

Earlier this decade, the Pennsylvania Legislature made storefront payday loans offices and the 300 percent interest that went with them, illegal.

But because the Pennsylvania Legislature is making the most of its Summer Vacation, Gov. Tom Corbett has turned the Governor’s Mansion into a payday loan storefront with just one customer: the School District of Philadelphia.

On Wednesday, Corbett announced that the Commonwealth would be giving the School District a $265 million cash advance. Last year, the state gave the district a $400 million advance to help stem budget woes.

Corbett also announced that the Department of Education had certified the renewal of the 1 percent sales tax passed by City Council earlier this year.

Making sure that the district’s 135,000 students are sitting in classrooms instead of their parent’s living rooms on Sept. 8 was the impetus behind this particular cash advance, Corbett said.

“The goal of this action is to allow the doors to open on day one and avoid layoffs,” he said. “Financially, this action will assist the district with their cash flow needs in the short term, reduce the amount that the district will have to borrow and as a result will save the district $5 million in borrowing costs.”

But while it represents money that the district can count on, it doesn’t solve the real problems, which are the $81 million budget hole the district has to fill and the layoffs that may result if that money isn’t found.

“The School District of Philadelphia has a deficit of $81 million. If you take $5 from your left pocket and move it to your right pocket, you are not $5 richer, it’s the same money,” said Mayor Michael Nutter. “Advancing money that is already owed to the School District does not solve this particular issue, they need new money, more money, recurring dollars that are going to come each and every year”

The Pennsylvania Legislature was supposed to solve that problem by coming backto Harrisburg from Summer recess on Aug. 4 and voting on a clean version of the cigarette tax. The House had passed its version on July 2, but the Senate passed another version that added things that had nothing to do with the School District of Philadelphia or its funding woes.

That bill was sent back to the House…and that’s where it will sit until the Legislature returns on Sept. 15, a week after schools are supposed to open in Philadelphia.

At the news conference announcing the cash advance, Superintendent William Hite kind of hedged his bets about what would happen if the district had to wait that long for the promised cigarette tax revenue. While he admitted that starting school later if the funding doesn’t materialize is a possibility, he also said that layoffs, program cuts, and a shortened school year were also on the table.

“All of this is very helpful,” Hite said of the cash advance, “But it doesn’t solve the $81 million funding gap. There is still work to be done. We can’t definitively say that schools will open on time.”

But at a Senate hearing called to address the District’s funding crisis that was held later on Wednesday, Nutter was a lot more direct.

“Without enactment of the cigarette tax, the School District of Philadelphia does not have the necessary revenue to open schools on time, safely, and for the entire year,” he said. “That is unacceptable. It would mean Philadelphia’s children will not have their right to a quality education delivered to them…not because of anything they have done, but because of the actions, or in this case inactions, of adults.”

“From my understanding, the legislature will vote for the tax,” he said. “The problem is that every month that the tax isn’t passed, the district loses $7 million. [The Philadelphia delegation] continues to push the House Leadership to call us back. We want to get this done before September.”

Gov. Corbett said that he was disappointed in the legislature’s inability to get the cigarette tax passed and even met with the Republican leadership of the House to try and get them to come back and vote. He expects them to work on a clean bill before tackling anything else, Corbett said.

But if the attitude of House Leadership toward coming back this summer is any indication, State Rep. Mark Cohen isn’t optimistic.

“This was a total abdication of responsibility by the Republican leadership,” he said.

A decision on whether or not schools will open as scheduled on Sept. 8 will be made by Aug. 15, Hite said.