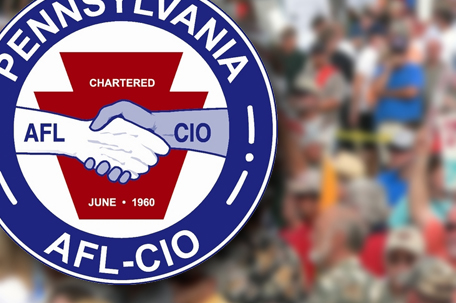 With less than two weeks until Election Day, the Pennsylvania AFL-CIO’s Labor 2016 campaign has already mobilized thousands of volunteers to knock on over 200,000 doors across the state. Over the next two weeks, Pennsylvania labor will reach out to an additional 250,000 voters at their homes in order to turn out voters for Hillary Clinton, Katie McGinty, and other pro-worker candidates down the ballot.

The AFL-CIO direct mail program, which has been active since late August, sent over 580,000 pieces of mail to Pennsylvania union members and households on the Presidential and Senate races. And over 400,000 mail pieces were also sent by local unions across the Commonwealth in support of key races. In addition to mailers and speaking directly with voters at the door, the Pennsylvania Labor 2016 campaign will engage in a wide range of GOTV actions, including phone banks and leafleting at worksites.

“Working people have been leading the fight in Pennsylvania to elect pro-worker candidates like Hillary Clinton and Katie McGinty. The GOTV efforts of the Pennsylvania labor movement in the home stretch will help ensure victories for working people on Election Day,” said Pennsylvania AFL-CIO President Rick Bloomingdale. Secretary Treasurer Frank Snyder added, “This is the peak of our political program. By working together, we will elect Hillary Clinton as the first woman president, Katie McGinty as the first woman senator from PA, and pro-worker candidates across the Commonwealth.”

Nationally, the AFL-CIO will leverage one hundred thousand volunteer hours to knock on one million doors in key battleground states in the remaining days before November 8th. The national AFL-CIO will also send almost 424,000 pieces of mail and nearly 1.4 million slate cards listing pro-union candidates to union households in Florida, Missouri, Nevada, North Carolina, Ohio, Pennsylvania and Wisconsin. This acceleration of the Labor 2016 program is a pivotal effort to elect Hillary Clinton and pro-worker candidates across the country.