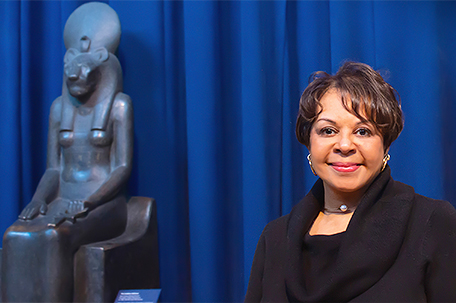 ABOVE PHOTO: Muriel Patricia Clifford in the Egypt Galleries at the Penn Museum.  (Photo: Julianna Whalen)

The Penn Museum has appointed Muriel Patricia Clifford as its inaugural development diversity liaison in an effort to deepen meaningful community connections.

In her new role, Clifford will lead community outreach strategies to increase awareness of the 134-year-old Penn Museum and the rich cultural experience it offers. She’ll cultivate a more diverse, equitable, inclusive, and accessible museum as a part of its diversity committee, advance its public programs and work across all internal departments to foster opportunities for engagement, including special events, presentations and tours.

A Philadelphia-native, Clifford graduated from the Philadelphia High School for Girls and earned a B.A. in communications and mass media arts with minors in journalism and Spanish at Hampton University in Hampton, Virginia.

She began her career as a community relations representative for the Philadelphia Opportunities Industrialization Center. Her experience includes serving as the director of public relations at Cheyney University of Pennsylvania and as associate vice president of government relations at Temple University.

A writer for the nation’s oldest African American newspaper, The Philadelphia Tribune, under her pen name Patricia Gilliam Clifford, Clifford’s “Out & About in Philadelphia” column delivered comprehensive event coverage and insight about notable community leaders. As a journalist, she has written extensively about social, community, fraternal, educational, historical, professional, and faith-based organizations. She has also written for The Philadelphia Sunday SUN and the South Jersey Journal.

Celebrations around the World: Free family holiday event rings in the Season at the Penn Museum, Dec. 3