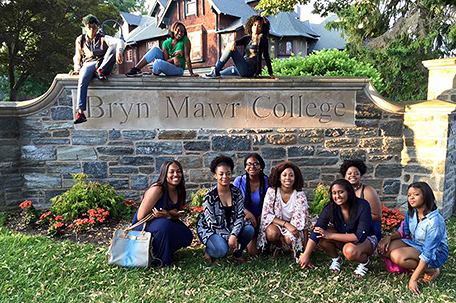 Young African American girls are being nurtured through Faatimah Gamble’s Pearls of Wisdom program and Elleanor Jean Hendley’s Teenshop. Through these programs, girls as young as 13 years of age are learning the skills, manners and finesse they will need to navigate future leadership roles as entrepreneurs or in the corporate and governmental world.

During Women’s History Month, the SUN will be taking a closer look at these programs and the dynamic women who conceived them. Both are charitable initiatives that serve a diverse array of African-American teens as they make their rite to passage 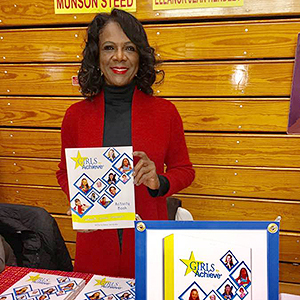 Gamble started Pearls of Wisdom more than 28 years ago, It is a course in etiquette education, leadership and life skills training. The curriculum is designed to help the participants learn the many skills they will need in the future. The program consists of recreational, cultural, and educational trips.  The participants also complete offsite classroom coursework. At the end of the process, they are given a financial stipend, a gift, and participate in the program’s black-tie showcase.

Many business professionals are called upon to maneuver through a different world. While traditional home training may have included American table manners, or perhaps continental style rules, in contemporary society, etiquette from other regions of the world is important to add to the list.

That’s where “Pearls of Wisdom” comes in. While it doesn’t negate the basic protocol many students learn at home, it does enhance it and prepares them for life in a 21st-century world.

This is evidenced each year when those who participated in the 28-week program showcased their finesse at “An Evening of Elegance” held at various posh Center City venues.

“We have had about 1500 young people come through our program,” Gamble said. “We have locations in different parts of the city. What the students walk away with is self-awareness. They learn how to dine even among diplomats with Cheryl Walker Robertson. We teach them things like you don’t butter the whole bread at one time.

At one point, they even learn how to eat pizza with a knife and fork. They also learn how to communicate using proper diction…just many of the thing they don’t usually get attending public schools.” 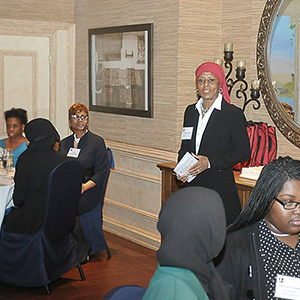 Another component of Pearls of Wisdom is teaching the girls how to make good connections.

“This is a 28-week program,” Gamble said. “We teach the boys [from the From Boys to Men program] and girls what to look for in a mate. To be a good partner, they learn how to be ladies and gentlemen. We discuss what is inappropriate behavior and learn how not to engage in negativity. So, they are ready to meet that right young man or woman because that’s part of Pearls of Wisdom, too.”

Initially, the program was comprised of eight 45-minute sessions. What Gamble and the other instructors soon realized was that this was too short a time for the youths to master the curriculum. Since it is a demanding Saturday session, current students must be referred, apply, be interviewed and accepted into the program. This ensures they are committed to complete the program and are not just being forced to attend.

Samira Dawan, now in college, went through Pearls of Wisdom while in middle school. While studying at the High School of Creative and Performing Arts, Dawan mentored her younger counterparts who were beginning the program. She was able to take the life lessons she learned from the community-based program with her while serving as a United Nations club delegate. The public speaking exercises, candid conversations about community responsibility, and the etiquette of formal dining and introductions served her well.

Dawan hopes that her mentees will be able to pay it forward.

“The greatest benefit of being in Pearls of Wisdom has been gaining a stronger sense of confidence,” Dawan said. “I think that building on public speaking skills goes hand in hand with learning how to handle different social situations. I have learned how to do multiple things. There are so many things that you learn in a program like Pearls of Wisdom that you just can’t learn in school. I learned different styles of eating—continental, American and Chinese. I learned many things about life that is passed down from gMwenyewe Dawan, Samira’s mother, learned about the program while her daughter was a student at the Universal Institute Charter School in South Philadelphia. She knew Gamble and liked the spiritual premise of the program. Though her daughter was already a Girl Scout program, she thought it would be a welcome addition to her extracurricular activities.

“Of course, we work with our children at home on basic (manners) but I think it is still beneficial to be in a formal program,” Mwenyewe Dawan said. “I like how the students are invited to participate and then have to be interviewed. The program that culminates is only a small part of what they get out of it.”

Samira agreed. She said that though she didn’t know the other girls in the program when she first arrived because of the wisdom element of the program they soon bonded. In fact, while many of her peers were sleeping in on Saturdays she was looking forward to sharing etiquette and spiritual lessons with her newfound friends. 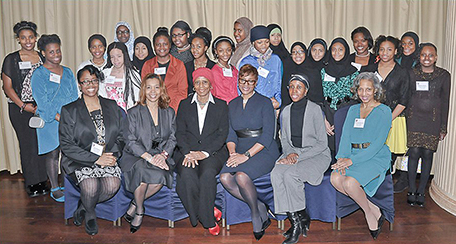 “The program provided me with three things,” Samira Dawan said. “First, we really enjoyed ourselves and I made lifelong friends, Second, when you leave Pearls of Wisdom you are part of an alumni group of those who already went through the program who provide mentoring, you have peer mentoring, and you can mentor others. Third, this is an opportunity to do community service because through the program we gave a gift basket to the Osun Village Senior homes.”

Gamble is proud of the program’s alumnae and the 98 percent high school graduation rates and 96 percent college enrollment rates they’ve managed to achieve.

Pearls of Wisdom and its companion program, From Boys to Men, end their programming year with the “Evening of Elegance.” This was introduced in 2012, and has been held biannually since — although the turnout at the 2014 event is making Gamble and the other organizers reconsider that.

Teenshop was founded by former television journalist Elleanor Jean Hendley for girls aged 12 to 19 to connect them with role models and give them a foundation as future leaders. She founded the first Teenshop chapter at Zion Baptist Church in the Nicetown section of Philadelphia in 1985. As the chapter expanded other churches — like the Grace Baptist Church of Germantown — wanted to have their own chapter. More chapters of the group sprang up in West, South, Southwest and other parts of the city.

Hendley tapped many of her professional contacts to volunteer for the program. When some of these volunteers relocated to cities like Los Angeles, they wanted to continue to volunteer with the organization, so sister chapters were formed.

These days, one can find Teenshop alumni like Tasha Samuels and Brittany Paris volunteering for other organizations as part of the civic spirit of Teenshop. They were manning information tables at this year’s African-American Children’s Book Fair at the Community College of Philadelphia.

“Ms. Elleanor Jean Hendley helped all of us raise our self-esteem,” said Paris, a Howard University alumnus. “We learned so much through the program that changed our lives.”

At the Book Fair, Hendley was still networking with the parents and young girls who were there explaining the program.

Periodically, Teenshop has reunion events in which the alumni come together to celebrate their Teenshop experiences. During a previous such gathering held at the Grace Baptist Church in Germantown, Hendley told those who were still the mentees in the program that she hoped one day they would be among the volunteers and chapter leaders.

There are some ground rules for Teenshop members, who serve as mentors to younger girls while they in the program. They must have a solid academic record. They must carry themselves with a decorum that shows that they listen to instructions, are well behaved, and are motivated. They must not be teenage mothers. Finally, they must be willing to cultivate a philanthropic spirit.

The latter is exemplified through projects like volunteering at the children’s book fair, collecting and then reading books for youngsters, and similar projects.

Teenshop has been known to do many innovative initiatives over the years. About nine years ago, Teenshop joined forces with Bryn Mawr College and the Urban Affairs Coalition for a program that would give urban high school seniors a taste of suburban college life.  Ten Teenshop members, eight from Philadelphia and two from Los Angeles, participated in a week-long program.  During that time, Teenshop members heard lectures, received encouragement from an adult sponsor, and learned about college preparation.

Teenshop provides an empowering experience for “girls with goals”