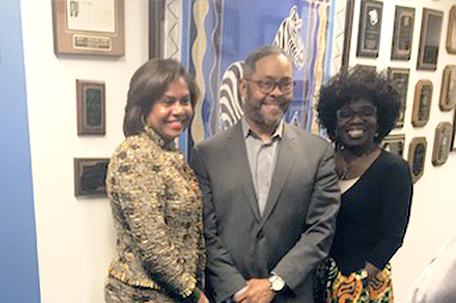 Philadelphia Convention & Visitors Bureau president and CEO Julie Coker Graham is the first African- American woman to hold this position. She previously made history working her way up from being a corporate management trainee and assistant front office manager to becoming general manager of hotels in the Chicago area, a journey Graham shared when she was the keynote speaker for the 2018 African Heritage Lecture Series at Enon Tabernacle Church recently.

During her presentation, Graham said that even though she realized some might say that her career trajectory was easy, it was not without its challenges. There were times during her 21-year stint with Hyatt when she had to relocate and learn new positions. When she was about to receive yet another promotion with the organization, she was offered a job in Philadelphia that offered her the possibility of becoming PCVB president within five years.

“There’s your plan, and then there’s God plan,” Graham said.

She said that many mentors helped her to obtain her current position. Among the things they taught her was “how to maneuver and navigate Philadelphia.”After assuming her new position, she was named chair of the mayor’s Democratic National Convention transition team. She also played pivotal roles in special events like the papal visit during the World Meeting of Families in 2015 and the NFL Draft last year, as well as events surrounding the recent Philadelphia Eagles Super Bowl win. 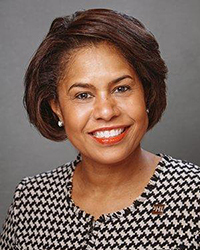 Besides sharing her immediate family background and anecdotes, Graham also gave an overview of her family tree that included a long line of educated professionals. She insisted that even without this legacy, one can still succeed.

“I thought this lecture was great,” said Karen Bruce, who joined Enon in 2011. “I thought it was good how she talked about family values and how her family encouraged their children. It’s important to let children know that some things are non-negotiable. Her journey can help a lot of others, if they just listen.”

Joel and Deborah Watson of Wyncote said they relocated from another part of the state to be close to Enon after they joined a decade ago. They said events like the African Heritage Lecture Series inspires them to faithfully return to the church beyond the Sunday morning worship service.

“One of the things that impressed me was that she acknowledged that it was not just of her own strength that diligence that put here where she is,” Joel Watson said. “She understood that she was favored by God, and for her to be where she is was no accident.”

Madeline Jones of Mount Airy, who was a visitor at the event, was inspired with a new idea of how to help her grandchildren. She said it opened her eyes to hear that Graham felt grounded growing up because her father still had ties to her maternal family even after the divorce.

“You would never know that she came from a single parent household,” Jones said. “That really opened my eyes to think that her father came to the extended family dinners. So, there was no ‘this is a struggling single parent household’ or that the father was absent. They still put their faith in God and family. The parents put their own problems aside and took care of the kids.”

In his remarks, Enon’s senior pastor, Rev. Dr. Alyn E. Waller said that although they have had many interesting speakers come to their African Heritage Lecture Series –like author Dr. Michael Eric Dyson — and stressed that this is just one of the many African-American history programs offered at the church.

Dawn Martin, the servant leader for the African Heritage programs, said that the Graham lecture was just the start of their 2018 programming. She said that there will be a Juneteenth celebration on Friday, June 15 from 6 to 8 PM. They will hold another community event during October before their Kwanzaa celebration held on the last Saturday in December.

“We look forward to seeing everyone come out for these events,” Martin said. “This is about being together and learning about ourselves.”