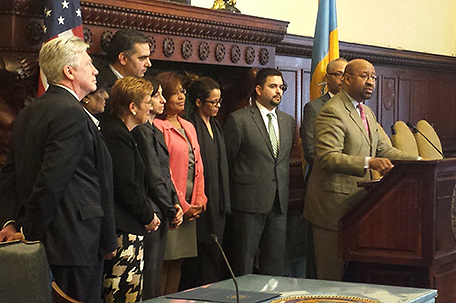 The Philadelphia Commission on Human Relations (PCHR) was among the many individuals and advocacy organizations on hand today when Mayor Michael A. Nutter issued an executive order that changes immigration policy for the city. Reaction was swift and joyous.

“We certainly applaud the mayor’s decision to issue an executive order that will clearly state the city’s position that all Philadelphians – regardless of immigration status – should be treated fairly and equally,” said Thomas H. Earle, PCHR chair.

At issue has been the human and emotional cost of automatic deportations triggered by minor infractions, or even false accusations.

Anecdotes of teenagers involved in skirmishes or men or women driving to work with a broken tail light suddenly in the pipeline of deportation upset and outraged working immigrant families throughout Philadelphia. It also thrust the realities and consequences of immigration policies in urban settings amid thinly stretched police and legal resources into the broader sphere.

Individuals and advocacy organizations such as One Love Movement, Juntos and the ACLU of Pennsylvania have opposed ICE holds, argued about these potential constitutional violations prompted largely because of someone’s skin color, physical features or accent.

In its ruling last month in Galarza v. Szalczyk, the court decreed that ICE detainers among state and local law enforcement agencies are requests, not mandates. As such, municipalities are free to disregard such detainers, and cannot rely on such requests as excuses to restrict someone’s constitutional rights.

“Deportation is a mechanism that can tear apart families, often separating children from a parent who may be the only source of income in the household, causing devastation,” Landau said. “Today, Philadelphia is taking an important step to help retain the fabric of our community.

“All immigrants should be able to come forward as victims and witnesses, be able to use city services – including police services – without fear of deportation,” she added. “And the Philadelphia Police Department should be allowed to focus its efforts on helping to build and strengthen our community.”