Paying The Cost To Be The Boss 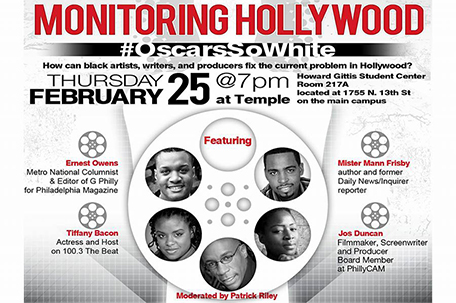 Rather than continue to bemoan the fact that the Academy Award nominations are often lily white, it might be time for people of color to remind the film industry who pays their salary.

Last Friday, the movie Gods of Egypt earned a distinction that no movie wants.

It became the first cinematic flop of 2016.

While reviews like this might have led to Gods of Egypt’s infamy, the fact that you had an all-White cast portraying Egyptians in the year of #OscarsSoWhite might have played a part as well.

To a group of local artists and entertainment writers participating in a cinematic panel discussion on Thursday, what happened to Gods of Egypt made perfect sense.

Because let’s be honest: one of the first rules of business is that the customer is always right…and the makers of Gods of Egypt are learning that in the most expensive way possible.

“Black people love going to the movies,” said Ernest Owens, a nationally syndicated columnist with the Metro newspapers and editor of Philadelphia Magazine’s “G Philly” online portal. “We’re putting in the money to make these films. It’s about equity and access.”

While the focal point of the discussion was Sunday night’s Academy Awards and how monochromatic most of the nominees were (Mexican director Alejandro Gonzalez Inarritu won his second Best Director Oscar in a row for The Revenant), the panelists also talked about the power that people of color have at the box office, and how it’s about time that they use it.

Much was made of a boycott of the Academy Awards on the part of several Black entertainers including actors Will and Jada Pinkett Smith, director Spike Lee and others due to the almost all-White list of nominees. But while most of the panelists were planning on watching the awards just long enough to hear what host Chris Rock had to say in his monologue, Duncan wished she could do what Black Lives Matter protestors have been doing to presidential candidates of late: disrupt.

But all that said, there’s a lot of reasons why artists of color should look at something like the Academy Awards and the Hollywood whiteout seems to be a part of it with a sense of optimism, Bacon said. Thanks to the digital age and the technology it’s spawned, the possibilities are endless, she said.

Over 30,000 samples of bacon showcased during Pennsylvania Bacon Festival at Xfinity Live! Oct. 4