Pay me what you owe me 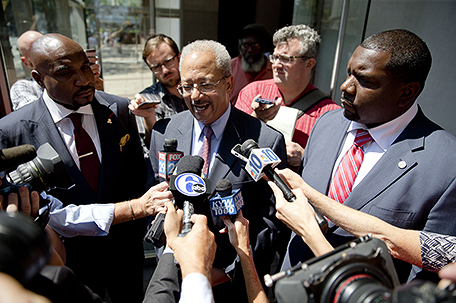 Much of the second week of the trial of Congressman Chaka Fattah was focused on his debts and his debtors.

When the Fattah for Mayor campaign ended in 2007, it was mired in the kind of debt that campaigns often incur.

During the second week of his trial, the jury hearing the evidence against U.S. Rep. Chaka Fattah got a look at the campaign’s alleged money trail, and saw that it went to some places it shouldn’t have, most notably Drexel University’s bursar’s office.

Brian Thomas Keach, director of governmental and community relations for Drexel, testified that Fattah’s son, Chip, was close to $30,000 in arrears while attending classes at the school in 2007 and had a hold placed on his account.

After trying to get the money from the younger Fattah though a payment arrangement, Keach testified that the Congressman was contacted.

“I talked to Congressman Fattah about his son’s debt and his academic standing,” he said.

After another payment arrangement, Drexel did receive money in the form of checks from Sydney Lei and Associates.

That money, according to the government, came from the Fattah for Mayor campaign, which left some of the campaign’s creditors high and dry.

For example, Gregory Harvey, one of the nation’s premiere election lawyers, was owed $84,000 by the Fattah campaign for work he had done in connection with a lawsuit filed regarding campaign finance limits. Lobbyist and former Deputy Mayor Herbert Vederman, a co-defendant in this case, convinced Harvey to go to his firm, Montgomery, McCracken, Walker and Rhodes and ask them to forgive the debt.

Harvey testified that he managed to get $40,000 of the money owed, but wouldn’t have if he knew that the campaign was allegedly misusing funds.

“I believe that it would have been material,” he said.

One of the more colorful witnesses on the stand this week was Robert Dililla, CEO of the advertising and public relations firm Strategic Message Design Group. SMDG prepared and printed campaign materials for the Fattah for Mayor campaign.

Dililla told the story of his trying to get paid from the campaign so that he could in turn pay the printers and designers he worked with. Invoices went back and forth and ultimately, he sent a email to Fattah for Mayor officials telling them that since one of his vendors was about to sue him for nonpayment, he’d have to consider doing the same to Fattah.

That led to a phone call from political powerbroker George Burrell. When Burrell asked him if he really wanted to take on a sitting congressman, Dililla’s answer was, well, colorful.

“I told him that he if wanted this to go away, pay the f*%ing bill!” he said.

This is the second week of the trial against Fattah and his four co-defendants— Karen Nicholas, former CEO of the Education Advancement Alliance, former Fattah aide Bonnie Bowser, Vederman, and former Solutions for Progress CEO Robert Brand-on a variety of charges ranging from conspiracy to money laundering.

The group is being tried on these charges in connection with a $1 million loan that was taken out illegally for Fattah’s 2007 Mayoral campaign and with using educational grants from NASA and the Department of Justice to pay it back.

The trial continues on Tuesday.