Patty Jackson returns to the airways on WDAS FM 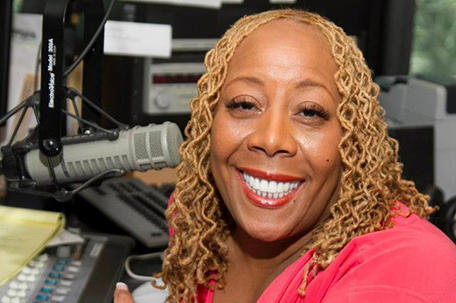 For the last seven weeks, fans of WDAS-FM midday radio personality Patty Jackson have missed her presence on the airwaves.

What many didn’t know was that the reason why Jackson wasn’t on the air was because of a stroke she had suffered two weeks after the passing of her mother last year.

It was something she didn’t see coming, Jackson said.

“I had a fall, which is probably when I had the stroke,” Jackson said. “But I didn’t think that’s what it was. My arm was weak, but I thought I probably just hurt it when I fell. I went to work, I went on with my life. By the end of the week, it had gotten so bad, I finally went to the hospital.”

After the stroke, Jackson suffered partial paralysis of her right side, and a loss of vision, which is why she’s currently wearing an eye patch on her left eye. While off air, Jackson went through weeks of rehab, which included learning how to walk again, as well as use her right side, and working to regain her vision.

“It’s very humbling, not to be able to do things that you normally take for granted,” Jackson said. “Not being able to bathe yourself. It makes you appreciate life.”

Jackson credits not only the support of her family and friends for her recovery, but also the health professionals at the Moss Rehabilitation Center. “Listen to them,” she said. “They are there to help you. They won’t let you give up. And having a positive attitude is crucial to your recovery. If you ever are in this kind of situation, listen to the doctors.”

Although back on-air, Jackson continues physical therapy. She is working to fully regain her vision, and build additional strength.

Stroke is the number one leading cause of death in African Americans. Some of the things you can do to reduce your risk factors for stroke include:

• Control your blood pressure. Check it regularly and record changes

• Maintain a healthy weight. More than 63 percent of men and 77 percent of women of African Americans over age 20 are overweight

• If you have diabetes or heart disease, or the early signs of these diseases, get treatment. Both of these conditions are treatable and preventable

• Incorporate exercise into your daily routine. Start by walking for just 30 minutes a day.

If you or a loved one seems to be suffering from a stroke, call 911 immediately.

Jackson is grateful for the support she’s received from everyone during her illness.

“I want to thank everyone for their outpouring of support, my family and friends who cared for me, during my recover, and for every text, email, message and prayer. I truly appreciate your love and support”, Jackson said. She also said her goals for 2016 include “regaining her health, spending more time with family, and spreading love and being a blessing to others.”