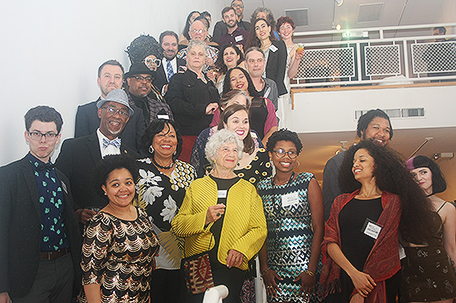 ABOVE PHOTO:  The committee for the 49th Dance With The Bride takes a group photo at their fundraising event held at the Painted Bride Art Center on Saturday, May 19th. (Photo: Robert Mendelsohn)

The Painted Bride Art Center celebrated its 49th anniversary with “Dance with the Bride” on May 19th. The art center’s 2018 annual fundraiser marked a very special milestone for the organization with the announcement that major change is on the horizon.  Within the last several months, the sale of its iconic Old City location at 2nd and Vine Streets was announced.

Laurel Raczka, The Painted Bride’s executive director said, “So now as we embark on this innovative and bold new plan, we imagine a future that gives us the capacity to focus on our central mission: TO SUPPORT ARTISTS.  We realize that to really support artists into the future, we need to be truly nimble and responsive to whatever the arts eco-system needs. The Bride is daring to be fearless in our new art-making model.”

The event was a farewell to the old location in the beautifully artistic style that has made The Painted Bride a Philadelphia icon for nearly five decades. It was an amazing evening for hundreds of supporters who enjoyed a great dance party, live entertainment, delicious food and libations.  The theme of this year’s event was “Deep Roots, Bold Future,” which joyously celebrated the Bride’s terrific legacy as well as its exciting future.

Joan Sloan, Painted Bride board chair remarked, “The Bride will bring music, dance and art to every neighborhood in the city — especially to those neighborhoods and those residents who would not regularly be exposed to the work of so many talented artists.  We don’t believe that our work should be limited to one place where only a few have access to events and programs. Our events should be as accessible to the residents of North Philly as those in Old City. We want to leverage the power of our arts and culture to strengthen Philadelphia and at times drive social change. We know this is a bold vision and from the feedback we’ve been getting from our funders and the national arts community, we fully expect this model to be replicated all across the country.” 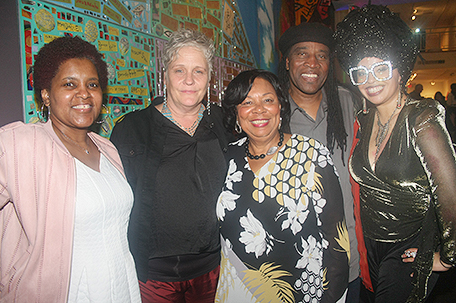 There were memorable and wonderful highlights of the 2018 “Dance with the Bride.” Christina May was the evening’s dazzling mistress of ceremonies.  The Bride called upon Paul Santoleri, Raul Barquet, Makeba Laurent, and more lauded visual artists to cover the walls of the Bride’s interior with larger-than-life murals.

The dynamic 15-piece ensemble, world music collective, People of Earth, headlined the event with a sensational blend of music from Cuba, Puerto Rico, Brazil and beyond. Between their sets and after, DJ 4ocus kept up the pace with an eclectic mix of classic and contemporary tunes. A second stage for mini-performances by Fresh Cut Orchestra, trumpeter/composer Josh Sims, and more was also featured.

Other enjoyable highlights of the event included a raffle, a silent auction featuring vouchers to local attractions, custom jewelry, original artwork. For night owls, the Bride offered the “Art and Change” after party that featured access to the open bar, noshes from Wishbone and a dance party hosted by DJ 4ocus. 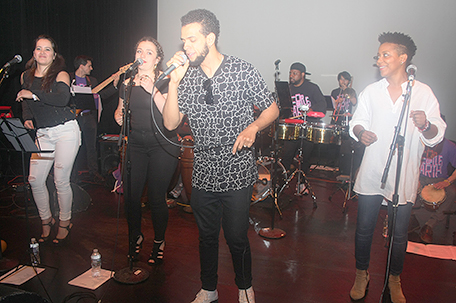 As stated by the organization, “Painted Bride Art Center brings together artists, audiences and communities to push the boundaries of how we create and experience art. We cultivate an environment for critical dialog and playful exchange to transform lives and communities.

Now celebrating 49 years as a pioneering presenter of performing and visual art, the Bride is more focused than ever on offering independent artists from Philadelphia and abroad the support needed to bring their creative works to fruition.”

The Painted Bride Art Center has been an amazing home for Philadelphia’s creative community, using their Old City venue as a space to connects artists with audiences since 1969. Board chair Joan Sloan summarized why we can be excited about the future of The Painted Bride and how it will continue to enrich our lives with art. “Our approach is threefold: to bring Bride programming directly to communities throughout Philadelphia, to focus on artist-led projects and develop them in venues across the city and in public spaces and to develop partnerships outside of the cultural community.”

It was a great time to be “Around Town in Philly” for this wonderful event. Congratulations and best wishes to all involved!