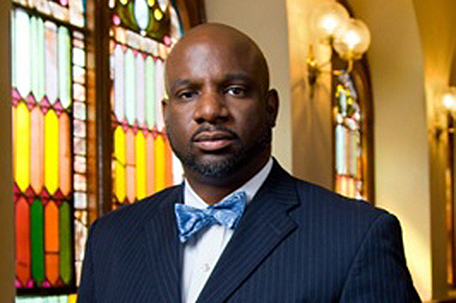 The 2014 PABJ President’s Award goes to the Rev. Mark Tyler and wife Leslie Patterson-Tyler, pastor and first lady of Mother Bethel A.M.E. Church in South Philadelphia. The Tylers were instrumental in hosting and facilitating critical events in 2013 and 2014.

PABJ held its February 2013 general body meeting with community leaders and members of the South Philadelphia community at Mother Bethel. The well-attended meeting was the first of PABJ’s “Community Series” in an effort to lend an ear and embrace the richness and diversity of the city’s Black communities. The aim of the meeting was to provide a venue where Black residents of South Philadelphia could discuss story ideas specific to their neighborhoods of Point Breeze, Greys Ferry, Queen Village, Southwark, Pennsport, Bella Vista and Forgotten Bottom. Speakers included: Rev. Mark Tyler, Pastor of Mother Bethel; Lois and Bumi Fernandez, Founder and Executive Director of Odunde; and Michelle Stevenson, Executive Director of Christian Street YMCA.

The Tylers were also instrumental in hosting the Chuck Stone memorial in Philadelphia on June 7,2014. Chuck Stone was a founder of PABJ and the founding president of the National Association of Black Journalists. Rev. Mark Tyler preached a spirited sermon and First Lady Leslie Patterson-Tyler assisted with setup, video and sound logistics. The service attracted hundreds, including many from out of town. The classical gathering was followed by food and drink at a nearby restaurant

The recipient(s) of the PABJ President’s Award are chosen at the discretion of the chapter president In the spirit of the award, the president chooses persons who deserve special recognition for their journalistic achievements and/or their service to the Philadelphia Association of Black Journalists and/or the community.

The awards celebration is scheduled for Saturday, October 18, 2014 at the WHYY-TV Studios in Center City. Tickets for the awards program and reception are $65; Students $30 with ID. Additional program information and tickets are available for sale online: pahstickets.eventbrite.com