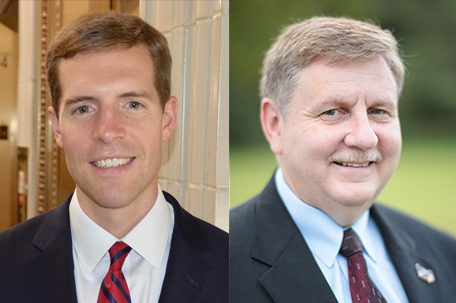 Lamb claimed victory before exuberant supporters early Wednesday as the number of votes still to be counted dwindled in a contest that has drawn national attention as a bellwether for the midterm elections in November when the Republican Party’s House and Senate majorities are at risk.

The Marine veteran told his crowd that voters had directed him to “do your job” in Washington. “Mission accepted,” he declared. Earlier, Saccone told his own supporters, “It’s not over yet, we’re going to fight all the way, all the way to the end, we’ll never give up.”

Lamb told CNN Wednesday he hadn’t yet heard from Saccone, but added, “I congratulate him on fighting hard the whole way.”

Regardless of the outcome — and a recount was possible — Lamb’s showing in a district Trump won by 20 points in the presidential race was sure to stoke anxiety among Republicans nationwide and renewed enthusiasm among Democrats.

Voters in Western Pennsylvania’s 18th congressional district head to the polls Tuesday for a hotly contested special House election. Republicans have spent nearly $10 million to save a seat that won’t exist in its current form by November. (March 13)

Wednesday morning, Lamb’s lead stood at 641 votes — out of more than 224,000 votes cast, according to unofficial results. Election officials said there are about 200 absentee votes and an unknown number of provisional ballots still to be counted.

The four counties in the western Pennsylvania district have seven days to count provisional ballots.

In a race this close, either candidate’s supporters can ask for a recount. However there are stiff requirements, including requiring three voters in the same precinct who can attest that error or fraud was committed.

The ultimate winner will face re-election in just eight months, and the congressional district as currently shaped will likely vanish next year thanks to a court-ordered redrawing of the state’s district maps. Yet President Trump and his chief allies invested tremendous time and resources in keeping the seat in Republican hands, mindful the contest could be used to measure Trump’s lasting appeal among white, working-class voters and Democrats’ anti-Trump fervor.

The White House scrambled to rally voters behind Saccone, who cast himself as the president’s “wingman,” but he struggled at times to connect with the blue-collar coalition that fueled Trump’s victory little more than a year ago.

Trump campaigned for Saccone last weekend, urging voters not to “be conned by this guy Lamb.”

Asked about Trump’s approach, Lamb told CNN: “There was a lot of foolishness in this election and a lot of really cartoonish campaigning, and I think by the time of the president’s visit…there was just a little bit of burnout on that type of campaigning.”

Lamb, a 33-year old former federal prosecutor, asserted his independence from national Democratic Party leaders and studiously downplayed his opposition to the Republican president in the district where Trump’s support has slipped.

But he also offered a full embrace of organized labor, hammered Republican tax cuts and promised to defend Social Security, Medicare and pensions. As he declared victory, he traced his politics to his grandfather — who was Pennsylvania state Senate leader — and President Franklin Roosevelt.

“People have a right to know that their government walks on their side of the street,” Lamb said. “What that means is I’ll work on the problems that our people face … and I’ll work with anyone to do that.”

He praised unions and their members — many of whom had supported Trump. The AFL-CIO estimates there are 87,000 union household votes in the district. “Organized labor built western Pennsylvania,” Lamb said. “Let me tell you something, they have reasserted their right to have a major part in our future.”

For Democrats, a win would reverberate nationwide, while even a narrow loss would be viewed as a sign of increased Democratic potential as the midterm season begins.

Lamb’s excited supporters included his middle school football and basketball coach, Joe DelSardo, who recalled him as “a leader from the beginning.”

The former coach described the district as having “a lot of suit-and-tie people and people who dig in the dirt.” Lamb, he said, “can talk to all of them, and that’s why he can win.”

Registered Republican Brett Gelb said he voted for Saccone, largely because the Republican candidate promised to support the president.

“Saccone backs a lot of President Trump’s plans for the country,” said Gelb, a 48-year-old fire technician who lives in Mt. Lebanon. He added, “I do think Trump is doing a good job. I think he needs backup.”

Democrats must flip 24 GOP-held seats this fall to seize control of the House, and months ago few had counted on the district to be in play. The seat has been in Republican hands for the past 15 years.

It was open now only because longtime Republican congressman Tim Murphy, who espoused strong anti-abortion views, resigned last fall amid revelations of an extramarital affair in which he urged his mistress to get an abortion.

Saccone tried to persuade the GOP-leaning electorate that their choice was about “making America great again,” as the president repeatedly says.

Saccone, a 60-year-old Air Force veteran turned state lawmaker and college instructor, enjoyed enthusiastic backing from the social conservatives who’ve anchored his state career. He’s been perhaps at his most animated when emphasizing his opposition to abortion rights.

Yet Saccone struggled to raise money, and that consistent fundraising deficit left him with limited resources to air the message he delivered one-on-one: His four decades of experience in the private sector, international business and now the Legislature should make voters’ choice a no-brainer.

National Republican groups filled airwaves and social media with depictions of Lamb as little more than a lemming for Nancy Pelosi — the Democratic House leader that Republicans love to hate.

Lamb answered the criticism by saying he wouldn’t support Pelosi as floor leader, much less as speaker if the Democrats should retake control of the House.

Besides bruising the president, a Saccone defeat also could shake Republican self-assurance that their new tax law can shield them from other political woes.

GOP’s invitation to Breibart shows they are lying about race