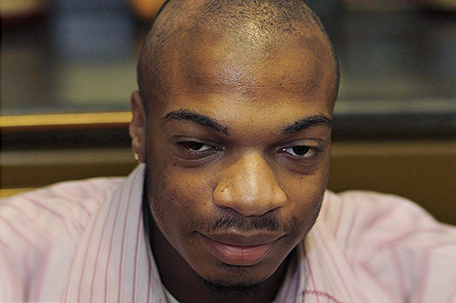 ABOVE PHOTO:  Jordan Miles is shown in 2010, in his Pittsburgh home.  It may signal a backlash by police who believe they’re caught between a thankless, often dangerous job and what police perceive to be soft-on-crime judges.  (AP Photo/Keith Srakocic, File)

PITTSBURGH –Three white plainclothes police officers concocted a story about mistaking a soda bottle for a weapon as an excuse for beating a black Pittsburgh performing arts student, the man’s lawyer told jurors Tuesday at the start of a second civil rights trial linked to the plaintiff’s 2010 arrest.

Attorneys for Jordan Miles and the three officers accused of unjustly arresting and beating him described starkly different versions of the confrontation: one started either by white officers suspicious of a black teenager in a bulky coat, or a prowling man who fled from officers and appeared to be armed.

A lawyer for Miles, who was an 18-year-old senior at the city’s performing arts high school when he was arrested on a frigid night in January 2010, contended the officers didn’t identify themselves as police when they jumped out of an unmarked car and chased him down.

The officers have claimed they thought a bulge in Miles’ bulky black coat was a gun, when it was actually a soda bottle. But Miles’ attorney, Robert Giroux, told the jury Tuesday that his client had neither a gun nor a bottle, and that police made up the story as an excuse.

“What this case is about, we believe, is abuse of power,’’ Giroux said. “They saw a young black male in a big black coat with dreadlocks, and they jumped to the conclusion that he was up to no good.’’

When Miles was arrested, officers found he was not armed. Police said he had a soda bottle in his pocket, but it was thrown away.

“Are you kidding me?’’ Giroux asked the jury. “How do you prove you had some basis for saying there’s a bulge if the thing that created the bulge is gone?’’

James Wymard, the defense attorney for officer David Sisak, said the bottle was tossed because it wasn’t evidence of the crimes police filed against Miles, including loitering and prowling at night, and resisting arrest. The charges were eventually dismissed by a city magistrate who said he doubted the police version of events.

In August 2012, a different federal jury rejected Miles’ claim that officers Sisak, Michael Saldutte and Richard Ewing maliciously prosecuted him. Ewing has since left the Pittsburgh police to become an officer in McCandless, a suburb just north of the city.

The current jury must weigh two remaining civil rights claims: that Miles was wrongfully arrested and that officers used excessive force against him.

Defense attorneys argue police were justified in stopping and even beating Miles. The officers were on special patrol in the high-crime, predominantly black neighborhood of Homewood when they reportedly saw Miles lurking near a house.

Miles said he was walking from his mother’s house to his grandmother’s house while talking to his girlfriend on a cellphone. But police allege he acted suspiciously when they stopped him and clearly identified themselves as officers, and then precipitated the incident by running away.

“All he had to do, members of the jury, was stop as any reasonable person would have done, and we wouldn’t be here,’’ Wymard said in his opening statement.

Miles has previously testified that he thought he was being robbed and didn’t realize the men who jumped him were members of law enforcement until he was put into a police vehicle after his arrest. Wymard ridiculed that claim Tuesday, calling it “utterly preposterous.’’

“We have three white guys in Homewood trying to put handcuffs on somebody. Who else could it be but police officers?’’ Wymard said. “It’s ridiculous.’’