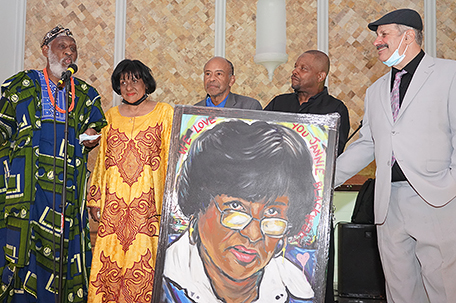 When future generations revisit the meritorious work of the recipients of the 6th Annual Philadelphia Legacies Awards, program founder and director, Stephen C. Satell, believes they will recognize the significant contributions that were achieved during an important period of our national development.

“Their accomplishments will be defined by their achievements despite great obstacles,” he said. “It is the calculated benefits of their commitment and untiring labor that will be of interest.”

Satell established the organization that honors Philadelphians who have made major contributions to the city and have positively impacted the communities they serve.

“Quite often, people overcome great obstacles to contribute to the common good and they build legacies that should be recognized,” Satell said. “We know many establish legacies through service without thoughts of recognition. We should [therefore] reward those that achieve great things despite obstacles without expectation of reward or recognition. It is that sentiment that endears this year’s legacy winners to those they have served.”

Philadelphia Legacies was founded six years ago by Satell as an outgrowth of the Bridging Worlds Program he directed. Since its founding, the organization has honored iconic and unacknowledged Philadelphians with beautiful commissioned portraits painted by outstanding local artists. Awards also were presented to unsung community leaders.

The event was held at The Victorian Banquet Hall, located at 4809 Germantown Avenue in Germantown. Some 150 attendees enjoyed the ambience of the venue, which was complemented by the vocals of Shirley Lite and her band, who enchanted the audience with an array of favorite jazz standards.

The perception of African American history has been greatly influenced by the scholarship of Dr. Molefi K. Asante. His academic study and research have done much to challenge the assertions that Africa has no place in history. He has proven through his lifetime of work that Africa indeed has a significant place in history and that history is dynamic.

Asante is a professor and philosopher. He is a leading figure in the fields of African-American studies, African studies, and communication studies.  He is currently a professor in the Department of Africology at Temple University, where he founded the PhD program in African-American Studies. The program was the first of its kind in the nation. Asante also is president of the Molefi Kete Asante Institute for Afrocentric Studies, which is located in the Germantown section of Philadelphia.

Asante is known for his writings on afrocentricity, a school of thought that has influenced the fields of sociology, intercultural communication, critical theory, political science, the history of Africa, and social work. He is the author of more than 90 books and is the founding editor of the Journal of Black Studies.

A member of one of the longest running political family legacies in Philadelphia history, Jannie L. Blackwell is a six-term Philadelphia City Council member who served from 1991-2020. She is a seasoned advocate for social change with a 30-year reputation for serving community members. Blackwell began her political career in Pennsylvania by serving as special assistant to the governor, was assigned to the Legislative Black Caucus in Harrisburg. She resigned with her husband, then State Representative Lucien E. Blackwell, when he ran and was elected to Philadelphia City Council.

In addition to serving as a delegate to the Democratic National Convention during the last four presidential campaigns, she served as administrative assistant for two Lucien E. Blackwell campaigns, four for City Council and three for the U.S. Congress. Blackwell is currently the vice chair of the Philadelphia Democratic Party and the ward leader for the 46th Ward Democratic Executive Committee. She continues to work for the community and its attendant issues of employment and homelessness.

Recognized as the founder and CEO of United Bank of Philadelphia, Emma Chappell was the first African American woman to form a commercial bank in the United States. She went to work at Continental Bank in 1959. While working, she attended Temple University. She later entered an executive training program allowing her to become acquainted with banking operations.  Chappell was promoted to assistant treasurer in 1971. By 1977, she had become Continental Bank’s first African American vice president. She used her position to assist in the development of Philadelphia’s Black community, granting more than $30 million in loans to Black enterprises.

In 1987, a group of prominent Black Philadelphians approached her with the possibility of starting a Black-controlled bank. In 1992, she raised $6 million dollars from the Black community and $3 million from big investors. The Bank’s mission was to provide quality personalized comprehensive banking services to business and individuals in Philadelphia.

Chappell was one of the founders of the Delaware Valley Mortgage Plan, played instrumental roles in the founding of Operation PUSH and the National Rainbow Coalition. She was appointed by President Bill Clinton to serve as a member of the board of directors of the Southern African Enterprise Development Fund.

The late scholar James G. Spady conducted his work outside of the established academic intuitions. His persistence created a body of work that included articles, books and scholarship as well as scholarly inquiry following extensive travels across the African continent and Western Europe. In May 1968, he and colleagues founded the Black History Museum Library at Heritage House in North Philadelphia. The library housed 3,000 volumes, pamphlets, brochures, slave tracts, papers, correspondence, paintings, musical instruments, recording, unpublished manuscripts, news clippings and other materials. This organization is the predecessor for the African American Museum in Philadelphia.

Spady was a longtime board member of the Marcus Garvey Memorial Foundation. He also published “Marcus Garvey, Africa and the Universal Negro Improvement Association.” Spady dedicated some years of life to documenting hip hop history and cultures as co-author of the trilogy “Nation Conscious Rap, Twisted Tales: In the Hip Hop Street of Philly and Street Conscious Rap.”

Philadelphia has a long history of unions representing workers. It was in this environment that Sam Staten Sr. was brought to the union hall of the Laborers’ International Union of North America, Local Union 332 by his father. His work in the union would eventually catapult him to its top leadership position. And he was determined to continue the legacy that his father and others built.

When speaking of Sam Staten, Sr. words like “innovator” and “tireless worker” are used to describe him. The Laborers’ Local 332, which was the first African American union in Philadelphia, is currently the largest union in Philadelphia. Staten fought to forge favorable working conditions and favorable compensation for the union’s members.

He also believed in training his members and a new training facility that bears his name is a testament to that commitment. The union’s members showed appreciation for his efforts by maintaining him in leadership until his passing in 2016.

Staten’s legacy will be tied to the Samuel Staten Sr. Charitable Trust, which was founded in 1999. The non-profit raises funds to assist charitable organizations within the Philadelphia area. Every year, the group holds its annual charity golf classic. The Qa’id Staten scholarship fund, a charity within the fund, was started in honor of Staten’s youngest son, who was age 17 when he was slain in North Philadelphia just months before he was to attend Howard University. The scholarship aids students seeking to attend college.

The collection, which Blockson — a noted historian and bibliophile — brought to Temple University in 1984 also holds among its publications first editions and holdings in African, African-American, African-Caribbean publications dating back to the 16th century.

The Blockson Collection is a treasure trove of historical information, and Turner is widely respected among scholars and researchers for the extensive archives, which include the papers of Dr. Ruth Hayre, Father Paul Washington, Barbara Easley-Cox, Samuel L. Evans and Grover Washington, among others.

While completing her doctorate at Temple University, Turner had the honor of working with the collection and worked on numerous projects with Blockson, who recognized her passion for African-American culture and history. He then became one of her mentors. After Blockson retired as curator in 2006, Turner succeeded him later that year after an extensive national search.

The Young Person to Watch Award

The Young Person to Watch Award was presented to businessman and political activist Jabari Jones, founder and president of the West Philadelphia Corridor Collaborative, which is the largest association of businesses in West Philadelphia.

While a student at Drexel University, Jones took the institution’s commitment to civic engagement to heart and founded the business improvement collaborative.  After graduating with a BS in Business Administration, Jones has worked to forge partnerships across the community. He is also the recipient of three Under 40 awards.

He works with local high school internship programs to encourage entrepreneurship and he advocates for local real estate development. Jones is the youngest board member of the 30th Street Station District Plan, which plans to develop a 175-acre area over the next 35 years.  Additionally, as a member of the roundtable, he creates strategies to prioritize local hiring and procurement for small businesses.

This year’s presentations also included Community Leadership Awards to those organizational directors who provided outstanding management and guidance for their organizations and constituents.

Satell noted that Philadelphia Legacies Week will continue to operate its historic tours that highlight the lives, work and legacies of its awardees and raise money for nonprofits in Philadelphia that are instrumental in combating poverty.

Additionally, Philadelphia Legacies will still continue to hold its quarterly networking meetings. Satell described the gatherings as an opportunity to develop a “solution-driven brain trust” that encourages its supporters to share resources or to pursue mutually beneficial partnerships.

To learn more about Philadelphia Legacies, you may call or text (215)432-2898, email  [email protected] or visit: www.philadelphialegacy.org.