“Our village is dying” (Cover STORY PART I, violence in Philadelphia) 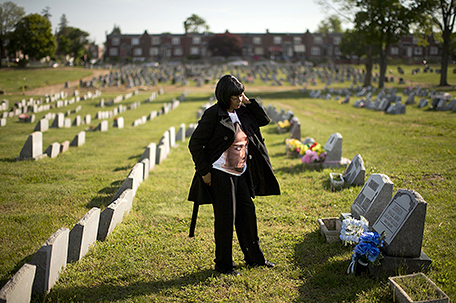 ABOVE PHOTO: Dorothy Johnson-Speight visits the grave of her son, Khaaliq Jabbar Johnson, in Philadelphia on Monday, May 9, 2016. Johnson was killed in 2001 – shot seven times over a parking space dispute. “We’re losing our loved ones at an alarming rate. I don’t think that folks that are fighting and talking about the second amendment understand us. We don’t want to take the rights of responsible gun owners away from those people. We just don’t want our loved ones to be murdered on the streets of Philadelphia and cities across the country because they have the opportunity to get guns so easily,” she says. “People with long criminal history records like the person who killed my son, like people with mental health challenges, they should’t have guns.” Johnson-Speight is the director of Mothers In Charge, a group that “advocates for families affected by violence and provides counseling and grief support services for families when a loved one has been murdered.” (AP Photo/Matt Rourke)

As of now, 316 Philadelphians have lost their lives to gun violence this year. Things need to change, but how?

The Haverford Deli, located at 51st and Haverford, probably didn’t set out to be the backdrop of a discussion on just how out of control the City of Philadelphia’s gun violence problem has gotten recently.

But when a 1-year-old in her mother’s arms is shot in your store, and the people having the press conference are trying to make a point about the issue, that’s what happens.

“Philadelphia is seen as lawless now,” said Councilmember At- Large Isaiah Thomas. “We have a perception issue. When a 1-year-old gets shot, something needs to happen. We can’t continue to have inhumane things like this happen and no one be held accountable for it.”

Philadelphia currently has one of the highest murder rates in the country for a city its size, according to the FBI Uniform Crime Report, which is why Mayor Jim Kenney currently has a letter on his desk from Controller Rebecca Rhynhart and Councilmember Jamie Gauthier demanding that he declare a state of emergency to address gun violence.

The deadline for his response is this Friday, and the letter itself was made public at a press conference last Friday in front of the Haverford Deli.

Because poverty and gun violence are interconnected, the people who have been the most impacted by both reside in those zip codes. Decades of disinvestment in communities of color has to stop in order to fix this, Rhynhart said.

“Addressing our city’s gun violence is an issue of racial justice,” she said.

“With much of Philadelphia’s violence occurring in just 14 ZIP codes, this crisis is disproportionately impacting Black and brown residents. Investment and resources must be targeted to these specific areas.

Whatever is being done now is not working.”

On Wednesday, Mayor Kenney and members of Philadelphia City Council announced the process that will allow community groups fighting against gun violence to access their share of $22 million.

The money, which was allocated as part of the $155 million “peace budget” passed by Council in June, would include technical assistance from a group including City Council members and officials from the Managing Director’s Office, the Office of Policy and Strategic Initiatives for Public Safety, the Department of Public Health, the Office of Children and Families and other city agencies.

“Through this partnership, and with support of the Monitoring Board, we’ll invest in community-driven prevention work through funding and emotional supports and help build on what’s working through evaluation,” Kenney said.

“This is an important piece of the city’s historic investment in violence prevention.”

“There are many things we need to do to address this unacceptable level of gun violence,” said Council President Darrell Clarke. “But nothing can replace a more engaged and supported community-focused approach.”

But while this investment will possibly help organizations that are in many cases operating on less than shoestring budgets get what they need to do the best they can to provide help for their communities, the question still remains — what works? And how do we get there?

That’s one of the questions that Catherine Hicks, the newly elected president of the Philadelphia NAACP, has been asking. She believes that it has to start with asking the community what it needs and trying to get it for them.

“We have to involve the community,” she said.

“We also have to find something more for young people to do. We have to offer them something, an alternative.”

It also might require us to look beyond our walls, Larry Krasner, Philadelphia’s District Attorney, said.

“We have to look at best practices around the country,” he said.

“We have to move forward and move in modern ways. That means that we don’t repeat the mistakes of the past.”

The mistakes of the past — mistakes including mandatory sentencing and other things that led to impoverishment in communities of color — mean that we have to be careful about what steps we take now, Hicks said.

“Before we call for a State of Emergency, I think we need to talk about it more,” she said. “I’m not sure that everyone understands what that entails. We shouldn’t do something like that until we have more clarity.”

But one thing that everyone can agree on is that we have to do something before we lose an entire generation of children.

“The reality is that if we don’t make this an emergency, our village is dying,” Councilmember At-Large Kendra Brooks said at the press conference.

“If we don’t make this an emergency to address the problem, there’s going to be blood on our hands.”

COVER STORY PART 2: Tommie Frazier: A young man with dreams of playing in the NBA and friend Kaylin Johnson killed

Tommie Frazier: A young man with dreams of playing in the NBA (COVER STORY PART II)