Op-ed- Community College of Philadelphia: A Beacon Of Hope With A Progressive Mission 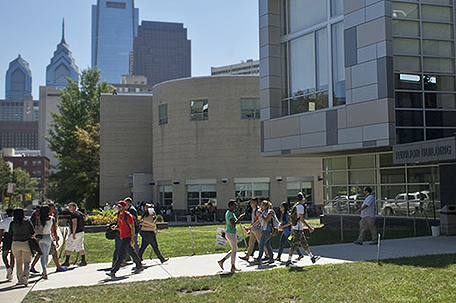 Community College of Philadelphia  has been under a spotlight in recent months that has both uncovered hidden gems and old habits that refuse to go into that good night.

Nestled in the middle of Spring Garden Street and a few blocks beyond, the main campus bustles with activity, and one can find many of the 28,000 students, going about the business of learning and earning their way to a better life.

The issues arose over what many considered the “root of all evil” – money and power. It takes both to make any machine work, but the problem usually lies in how unequally it is distributed and those whom it serves well and want to carry on business as usual.

Herein lies the rub – at least for me. The inequities are startling. Where there is data to show, the students carry 60 percent of the operating costs – the SAME students who would not ordinarily have access to college, because their families often cannot afford it.

In addition to that are statistics that show the disparities in the amount of classes full-time professors teach. In comparison to other community colleges, with a competitive health care package that would make the average person jealous around the country. We will get back to that.

At the heart of my initial visit to the campus, I sat down with three young men who were part and parcel of a program that kept them showing up and giving their very best in a place where women make up 63 percent of the student population.

That life-altering program is called the Center for Male Engagement. To hear these three young men — Mark, Courtney, and Gary — tell it, they would have not dared to HOPE that they even belonged on a college campus, much less attend, without CME.

“We ARE the Center for Male Engagement,” they proudly state.

All are first-year students with dreams and goals, thanks to their support coaches.

“My grades in high school were so bad, and I couldn’t even pass the basic test, so that I would not be stuck in remedial courses,” said one young man, who also cited that affordability was a factor.

“CME sent a coach to my school to help us to get better and gain access and they continue to follow us every step of the way,” he said. “This program is real, and helped me to set my priorities straight. I didn’t want to get to Community, only to end up frustrated in remedial courses. When I leave here, I am going to Kutztown to finish my bachelors, get my masters, then PhD.”

He is so right.

No one is disputing that the faculty at CCP are some of the best colleges have to offer students, administrators and support staff all agree on this important fact.

When Dr. Donald Guy Generals took over the helm in July of 2014, the graduation rate at CCP was a paltry 7 percent. It has since gained traction under his leadership and rose to 16 percent with the goal of 35 percent in the near future.

After speaking to those young men, I can see why the school has gained traction. It is unconscionable to keep taking tuition from students with no real road or hope to graduation in two years.

Generals has in place dual enrollment at a few high schools in Philadelphia, and one of them — MaST Community Charter School — has students who are now graduating with a diploma AND an associate’s degree. I call that bringing students to a competitive workforce with a shot to earn beyond the minimum wage. Imagine that.

Generals is presently building a state of the art science lab for the students that will keep them competitive with four-year institutions. He is renovating the library. He is creating workforce development opportunities in partnerships with businesses in Philadelphia, which only makes good sense. He is also working on trying to get the campus accredited to bestow a bachelor degree program, so that families in the catchment areas who can’t afford to pay for a four-year college will have the options to stay at Community.

He is quite simply being progressive in removing the barriers of inequities, which can only lead to a stronger workforce in Philadelphia and beyond.

So, why are we in the midst of this again?

According to my research, it is due to an old policy that has been in place for decades and has long since passed its time in light of how colleges are competing for dollars is at the root – not to mention how it drains the college to the tune of $33,000 for each faculty member enrolled. I  also won’t even touch upon the fact that the vast majority of those in this “plum” program are White. I won’t tell you that these people are in what is coined a “pre-retirement program”, where they go from teaching full-time to part-time and STILL keep full benefits.

This means,  for those who may not fully grasp what they are reading, that these faculty members could be teaching a paltry two hours a DAY, collecting FULL benefits and see no issues with that, because after all, it has “always been this way.”

Change is difficult on a good day. When the fattened calves see their milk supply dwindling, they will work hard to maintain the status quo.

We are talking an easy one million dollars that could be used for programming or reducing student costs.

When you go further to look at the compensation packages for faculty, it is competitive across the board with other local community colleges. The benefit package at CCP is such a sweet deal, it makes my tooth ache. Where else on earth would anyone be allowed to only pay less than $17 per paycheck for single coverage insurance and less than $44 to cover a family?

How that translates in raw dollars for the annual budget will make your head spin. Two -thirds of the annual budget is spent on salaries and benefits alone. At CCP, full-time faculty teaches four classes instead five, like every other community college in the state. It is about changing the way they work.

I have also been made aware of the part-time faculty of color who have been in that status — some for over a decade — because they can’t get past a search committee that never seems to recommend them. I smell “bias chum” in the water. I am told  that the search committee now has to have at least one person of color amongst them. Let’s see if that helps. I, for one, will be following up on that closely.

Generals is a serious man, whose aura brooks no foolishness, and his passion is progressive learning in urban settings.

It is clear from sitting with him that he has experienced everything and the kitchen sink being thrown at him as he works to gain traction in the fifth largest city in the country and to put CCP on the national map with innovative ideas and a mission to be competitive enough to win a coveted Aspen award.

He is clear about the vision and, quite frankly, after touring the campus and seeing all the moving parts required to keep it going, I caught the vision, too.

All we need now is for some to embrace equity, so that the campus and the students served can gain a lot more.

Community College of Philadelphia’s administration and the Faculty and Staff Federation reached three tentative agreements on a new labor contract in the late evening hours of April 3, 2019. The agreements were reached with the help of Richard Lazer, Philadelphia’s deputy mayor for labor, and state mediator Bill Gross. The tentative agreements with the College’s support staff and full-time and part-time faculty members must be ratified by the union membership to take effect.

“With a lot of time and effort on everybody’s part, we were able to come up with a successful resolution,” said Dr. Judith Gay, vice president for strategic initiatives and chief of staff.

“This proposed contract puts the needs of CCP’s diverse students first, and enables the College to expand programs and provide grander opportunities,” Dr. Donald Guy Generals, president of the College, added. “In the end, our shared desire to help students enabled us to find common ground. Community College of Philadelphia is stronger today as a direct result of this vigorous debate and dialogue. This is a great day for the entire City.”