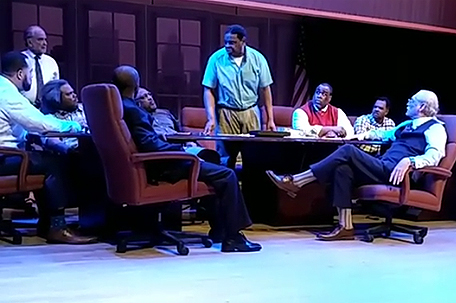 March has been a busy month for Frankie Darcell, who most recently took her love of theater to Venice Island Performing Arts & Recreation Center in Manayunk to direct and produce “12 Angry Men”, a remake of the 1954 teleplay by Reginald Rose.  Updated for modern appeal, Darcell’s version was set in Philadelphia with much more melanin, as 9 of the 12 jurors were Black men.  This production had a lot of impressive actors who made quite the impact on the audience. 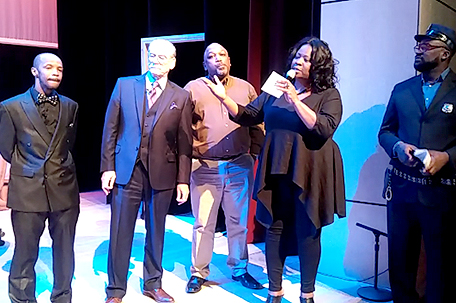 This is Darcell’s third stage play, and its a memorable one.  All of the actors chosen in her productions are passionate people who do their best to become the characters they portray, taking the audience on an emotional yet adventurous journey for three acts.

“12 Angry Men” is a play about 12 jurors who have the task of determining the fate of a young man who is on trial for murder.  They must sit and deliberate and come to a consensus of a guilty or not guilty verdict before they leave the room.  Each of the men has their own emotional biases, but they must do their best to remain fair and honest and most importantly just as a young man’s life hangs in the balance. 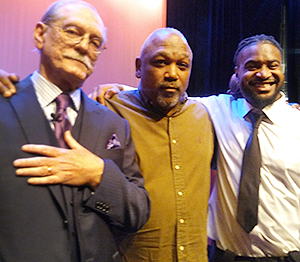 Some of the stand out performances in this production include Charvez Fitzgerald Grant (Juror #3) who was by far the angriest man in the room.  His emotions played a serious role in his actions as well as his decision of determining whether the defendant was guilty. Grant’s role was abrasive and confrontational, and he was very much stubborn throughout. He was absolutely entertaining to watch and hear, as his anger permeated through the room.  T.C. “Storm” Caldwell (Juror #7) is another gentleman who was highly entertaining.  Although he wasn’t much of a talker, his role was enthusiastic nonetheless by all the facial acting he was doing.  Occasionally I would glance at him just to see what he was thinking, as it was written all over his face.  Jonathan Hirsch (Juror #11) is another juror that was hard to miss as his imitation at a thick Russian accent was laughable but really good as well. The Temple student played the role of a foreigner really well because he brought a fresh perspective to the table and was applauded for his efforts to maintain justice.  And finally, newbie Dr. H Jean Wright (Foreman), II took a break from his day job as a clinical and forensic psychologist to be apart of this production.  His soft spoken and levelheaded attitude rang supreme when managing 12 disgruntled jurors, making his transition from psychologist to actor seamless.

As the final show wrapped up March 22, theatergoers have no choice but to anticipate what is next for Darcell and her Diva at the Stage Door Theatre Company but whatever it is, it will be sure to entertain and draw emotions from all involved.

Should sisters be concerned about the Super Bowl Pepsi Max Commercial with the angry Black woman?