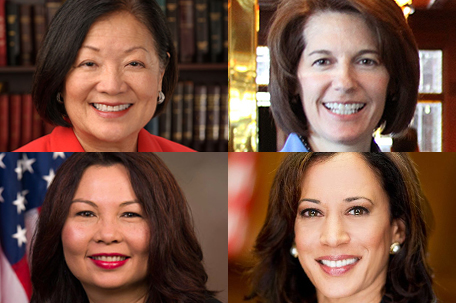 The number of women of color in the US Senate quadrupled Tuesday night, with victories for women in California, Illinois, and Nevada boosting the count from one to four. Here’s how it happened:

Mazie Hirono, a Japanese American who represents Hawaii, was, up until Election Day, the only woman of color in the Senate. Elected in 2006 after the retirement of Sen. Daniel Akaka, she became the first and only Asian-American woman senator and the first woman senator from Hawaii.

It was announced relatively early in the night that Democrat Tammy Duckworth, another Asian woman (her mother has Thai and Vietnamese heritage, and her father is white), beat her Republican opponent, Sen. Mark Kirk, in Illinois.

California Attorney General Kamala Harris (D-CA), who identifies as both black and Indian-American, won her race against Loretta Sanchez to take California’s seat. Sanchez is Latina, so this race would have added one woman of color to the Senate’s count regardless of the outcome.

Four is still, of course, a very small number when you consider there are 100 Senate seats. But it’s a significant increase — and the largest leap in any one election.