On the Table Greater Philly 2018 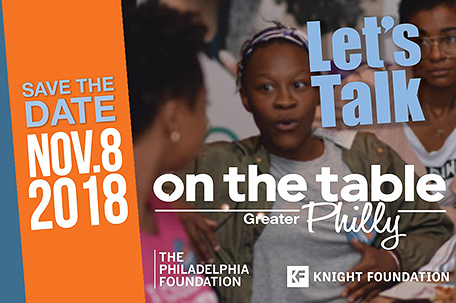 On Thursday, September 20th, a small group of Philadelphia influencers, business representatives and concerned citizens gathered at the Reading Terminal to discuss “On the Table Philly.” The concept of On the Table is simple but effective — bring people together to enact change through the act of breaking bread. Each year the forum gathers various members of the community together to explore ways to improve communities while sharing a meal.

“Through the Knight Foundation, which is a national foundation out of Miami that focuses on civic engagement, we learned about an initiative called On the Table that was being run by The Community Foundation, our counterpart in Chicago.” Ramos said. “The idea seemed so simple, and it was if you give people the opportunity, some basic tools, some kind of do’s and don’ts, everyday people will take the occasion to get other people together and talk about how they can do good for their community, without having to be organized by an institution.”

“We decided last year to pilot it,” Ramos continued. “Over 2,000 people at 300 different tables came together, shared small meals, snacks, dinner and beverages with groups of 8 to 12 people. They got together and had these conversations. They then shared what they talked about through On the Table. We were able to look at these conversations, and we saw that there really is interest in this very powerful, very basic idea. This year we were able to share with hosts’ prompts based on the survey results from last year, regarding what was most important, what people were happiest about and what people were unhappy about. This year we also want to introduce additional tools to enable the conversations to keep going.”

Anuj Gupta, general manager for the Reading Terminal Market, spoke about their involvement last year and what he looks forward to this year.

“We hosted several tables, both during breakfast and lunch,” Gupta said. “We had a variety of topics. One of them was food insecurity and what we can do about that; another was hosted by a gentleman who was involved in the West African and Caribbean community. He wanted to explore the intersection between the African Caribbean immigration diaspora and the African-American community. They had a really interesting lively discussion.”

“Our attention this year, is to host at least as many sessions as we did last year if not more,” Gupta continued. This is something that happens every day at the Reading Terminal, so it’s part of who we are as an institution… it’s part of our mission, and we are really glad to support it. I hope it becomes an ongoing effort here in Philadelphia. We should be doing this all year round, quite frankly.”

Douglas Oliver, vice president of PECO, echoed a similar sentiment about the benefits of bringing the community together and also shared his excitement for the growth he hopes to see during this year’s discussions.

“We were an inaugural partner for the first On the Table Philly, Oliver said. “The concept was appealing, with diversity and inclusion being at the core of what the company (PECO) stands for in addition to safe and reliable electric service. We hosted a table session last year with about 15 to 20 people. It’s absolutely true — when you’re sharing a meal, breaking bread one with another and talking with each other, instead of at each other, new ideas are birthed”, Oliver said. “What I like about the program, is it took all of the ideas that came from our table, combined them with hundreds of other tables and put all of that into a useful document we can all learn from. We saw so much success during the first year… with the second year, we’re really excited about doing it again.”

Yocasta Lora, associate state director of community outreach for AARP Pennsylvania, spoke about the impact On the Table Philly has in bringing not only various communities together, but also bridging generational gaps.

“My involvement with On the Table last year, was based on a campaign that we are managing called, “Liveable Community”. We try to have the community together regardless of age,” Lora said. “We have also hosted community conversations based on transportation, housing and opening spaces to learn from the community members how AARP can bring resources to the community to work with other community organizations. This is not just about AARP, which is what is so fascinating about working with On the Table, because it’s a group of community organizations bringing resources together for us to support the communities that we serve regardless of age.”

On the Table Philly did tremendous work in connecting communities and encouraging residents throughout the Greater Philadelphia region to be active participants in the changes they wish to see. This year’s discussions will only continue to help our communities improve and thrive.

On the Table Philly will take place on November 8th, 2018. Visit www.onthetablephl.org to find out more details on how to register, host and participate. To keep the conversation going online follow @OntheTablePHL on Instagram and Twitter and use the hashtag #LetsTalkPhilly.

Inaugural ‘On the Table Philly’ event a huge success