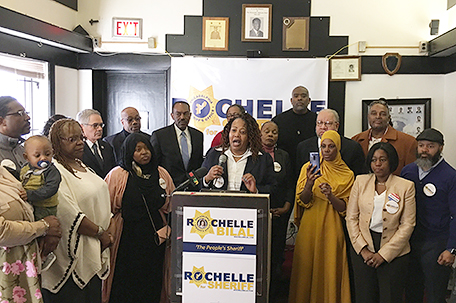 As she prepares to become the first woman to be the Sheriff of Philadelphia County, first female Sheriff Rochelle Bilal is on the move.

On a recent Saturday evening, she was coming from a meeting with her transition team after spending much of the week observing the inner workings of the Sheriff’s office she’s about to take over in January.

Much of that observation involved talking with the people who will be working with her once she is sworn in, Bilal says. Not just the supervisors, but also those who have been there for a while and probably have some wisdom they want to impart.

“You have to talk to the rank and file,” Bilal said. “There are people who have been working in the Sheriff’s office for 15, 20, 25 years. You have to get their ideas and find out what they think will make the office work better. They’ve been there and they have a lot of things to say.”

Listening to those who have been working in the Sheriff’s office for a while has become a big part of what Bilal is doing since defeating Sheriff Jewell Williams in the primary for the Democratic nomination for Sheriff. Earlier this month, she announced her transition team and says they’ve hit the ground running.

“It’s been pretty good,” she said. “We observe things and then we get together and talk about how we’re going to tackle them. You also find things you need to take care of as you move along. The team is made up of law enforcement officers, faith leaders, activists and advocates, and people with military experience. They were selected because Bilal and those advising her thought that they would bring the kind of experience she needed to do the kinds of things she wants to do with the Sheriff’s office. The co-chairs are Louis Valori, principle of the Valori Group, Bishop J. Louis Felton, senior pastor of the Mt. Airy Church of God In Christ and Paula Peebles, a longtime activist who is president and CEO of the Renaissance Community Development Corporation Inc.

And those priorities depend on the audience she’s speaking with. For instance, she wants to provide improved professional development opportunities for the staff at the Sheriff’s office, Bilal said.

As for the citizens of Philadelphia, she wants to help keep neighborhoods together by keeping people from losing homes to Sheriff’s sale. While there are a programs the Sheriff’s office does that are designed to help people in that situation, Bilal doesn’t feel they’re as well known as they should be, she says. And to help Philadelphians dealing with the possible loss of their homes, getting the word out about these programs and how they can be used to help has to be job one. She also plans on working with new Register of Wills Tracey Gordon to help with what’s known as “tangled titles”, which involves living in and paying the bills on a home that you’re either renting to own, or are living in due to family arrangement, but you’re vulnerable because your name isn’t on the deed to the home.

“I’m going to start a non-profit in my first 90 days aimed at helping families keep their homes,” Bilal said. “When you’re going through the Sheriff’s sale process, that’s traumatic. Foreclosure is a trauma. Tangled title is a trauma. There are people, especially low-income people, who really need help with this.” As she approaches Inauguration Day next month, Bilal believes that she’s ready for the next phase in her career as a leader in law enforcement.

“I don’t think that there’s going to be much I have to change about who I am,” she said. “I’m very conscious that I have to lead by example.”