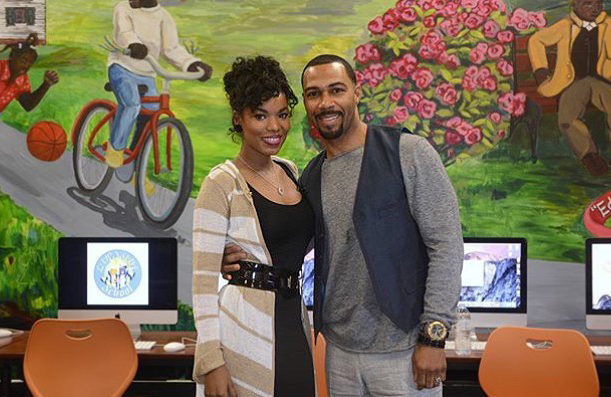 Actor Omari Hardwick’s star continues to rise as he continues to use his platform to give back to the community.  The actor, who stars as James “Ghost” St. Patrick in the television drama series, Power, made a celebrity appearance at the Lawnside Education Foundation’s 6th Annual Dinner Date Fundraiser.

“Education is the most powerful weapon for changing the world as our backdrop,” said Hardwick at the Feb 27 event.

Hardwick, who is also a philanthropist, poet and community activist makes it clear that his mission in life goes beyond acting.

“In my journey I’ve made this a mantra of mine–that as an actor, artist, producer eventually or director, there would never be a role that could trump that of me in the lives of kids, and particularly kids that look like me,” said Hardwick.

The Lawnside Education Foundation’s mission is to secure resources to support projects and programs that will encourage a higher level of excellence for students in the Lawnside School District.

Omari uses his power to protect, serve, and empower youth all over the world. He also has a foundation of his own called the bluApple Poetry Network. The network is a free, after-school, spoken word, poetry program that caters to students in the Broward Dade and Palm Beach County schools in Florida. The initiative began with an idea from a childhood friend to pair Omari’s love for poetry with his desire to help the next generation flourish. The idea lead to a partnership with retired NFL player Jason Taylor.

One of Omari’s goals is to undermine the stigma that being smart isn’t cool.

“We have to learn to be voracious readers, and to teach especially our brown kids that being a nerd is cool.  We have to teach that.  We have to bring nerdiness back and make that word have a little swagger to it.”

As for his Philly connection, Omari has fond sentiments for the “city of brotherly and sisterly affection.” Omari discussed Rocky director, Ryan Coogler, to channel his feelings about Philly.

“Last week we were at ABFF [American Black Film Fesitval].  Ryan Coogler stood up and said:

“You can have Sylvester Stallone be the face of the Rocky franchise, and now all of a sudden it looks like Ryan Coogler and Michael B. Jordan. That, to me, is Philadelphia. That’s Patti LaBelle, The Roots, my friend Jill Scott, Musiq Soulchild, and everyone in between that I failed to mention (definitely charge it to my memory and not my heart). I’m a soulful cat and Philly is as soulful as it comes!”

Season 3 of Power will return in June.  Hardwick gives insight into what to expect with the show and his character Ghost.

“More mayhem. Everybody has some corruption inside of them,” he said.

Omari Hardwick of “Kick-Ass” has arrived!