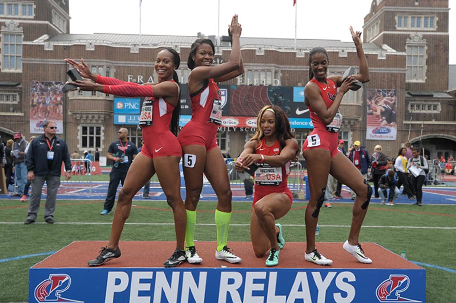 INDIANAPOLIS — A strong lineup of Olympic and World Championships competitors – including Jamaica’s latest sprint sensation – is set to face off in the USA vs. The World events at the Penn Relays on Saturday, April 29. Seven nations, plus Team USATF, will light up the lanes on the track at Franklin Field.

The international relay competition will be available on USATF.TV +PLUS and NBC Sports Group properties.

Teams from the Bahamas, Jamaica, the Dominican Republic, Guyana, Haiti, Nigeria, and the British Virgin Islands are scheduled to compete in the six events staged on Saturday afternoon. Athletes converge on the Franklin Field oval to vie for titles in the men’s and women’s 4x100m, 4x400m and sprint medley relays. Team USATF clinched five of the six events last year.

Earlier this year, USATF and Penn announced a new partnership through 2020. The new partnership will expand television coverage from the traditional USA vs. the World relay events on Saturday to include a live, Friday night show on NBCSN. USATF.TV also will stream a live global webcast of the Penn Relays live during all three days of competition from 2017 through 2020.