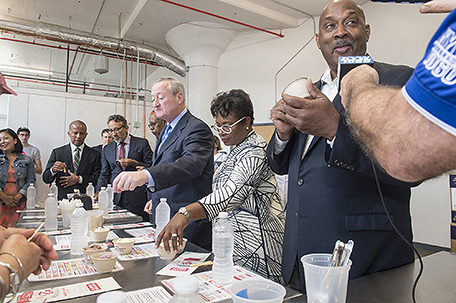 However, these days, thanks to a partnership between Goldman Sachs, the City of Philadelphia, Community College of Philadelphia and Shift Capital LLC, hope, jobs and opportunity are being manufactured in a building at 3401 I Street in one of the city’s hardest-pressed neighborhoods.

A few blocks away, opioid addicts shuffle along Kensington Avenue. Inside the former factories, now known as MaKen Studios, 60 to 70 new businesses have taken space, employing more than 190 people.

And on Wednesday, those successes were cause for celebration at MaKen, over samples of chocolate sea salt and blueberry lemonade ice cream manufactured in the factory by one of the 428 business owners who have benefited from Goldman Sachs 10,000 Small Businesses -Greater Philadelphia, a program that began at the College in 2013 and is giving rise to a new class of highly-skilled entrepreneurs. 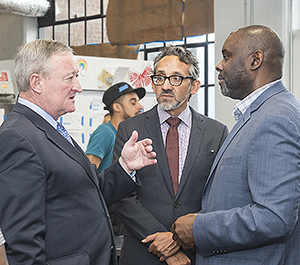 Several of those 10,000 Small Businesses graduates have set up shop in the MaKen North and South buildings. Each has increased business revenues and added new jobs.

“This neighborhood needs all the support it can get. The more jobs we create here, the more it can save lives,” Mayor Jim Kenney said, after operating a batch freezer to produce a tub of pink-hued birch beer vanilla bean ice cream. “No matter how low we go, there’s always hope and an opportunity to bring the neighborhood back, thanks to Goldman Sachs, Community College and the (Philadelphia) Commerce Department.”

“Beyond increasing revenues, it’s about hiring people,” said Dr. Donald Guy Generals, the College’s president, who spoke to the group gathered among freezers and mixers at Little Baby’s.

Graduates not only achieve, but they have “come together as alumni to raise money” for the College’s scholarship fund providing tuition-free college to qualified graduates of Philadelphia high schools, Dr. Generals said.

The celebration (and the ice cream) drew supporters and alumni to MaKen.

Among the supporters were U.S. Rep. Dwight Evans, who has had 180 businesses in his district participate in 10,000 Small Businesses; Nicole Pullen Ross, managing director, Mid-Atlantic Region, Private Wealth Management, of Goldman Sachs, and Harold Epps, director of Commerce for the City of Philadelphia.

Alumni included Ken Carter, president and chief operating officer of SUPRA Office Solutions Inc., architect Richard Olaya of Olaya Studio, and Dr. Cassandra Jones of Next Step Associates LLC, all from Philadelphia, with graduates drawn from all 10 City Council districts. Many alumni do business with each other. For example, Olaya assisted with the design as Little Baby’s renovated its new space.

Jones said the 10,000 Small Businesses program made a real difference for her business. Other business programs, she said, send you out with “a business plan that sits on your desk. Goldman Sachs gives you a program you use every day. It’s focused on growth and accountability.” In her case, she hired a vice president of business development and an administrative assistant so she could focus on her expertise, which is providing top-notch training for adults in the workplace.

Little Baby’s Martin Brown said the program helped guide him and his partner through an expansion of their grocery business. They used to stock their premium ice cream in a few local food cooperatives and five nearby Whole Food stores. Soon they’ll supply 50 Whole Food stores in partnership with a dairy in central Pennsylvania.

“That was definitely a challenge and a new wheelhouse for us,” said Brown, who graduated from the program in 2014. Since then, revenues have doubled and should reach $1 million by year end. Hiring has also increased from two to six fulltime employees. When Little Baby’s opens its fifth storefront later in August, total payroll will top 50.

The 10,000 Small Businesses program makes the businesses better tenants and negotiators, according to Matthew Grande, a principle at Shift Capital, the building’s developer. He says he leads prospective Shift employees on tours of the neighborhood to build bridges to the community and the firm is engaged in conversations about shared community growth.

“Our biggest challenge is the maturity level of individuals’ business,” Grande said. The 10,000 Small Businesses graduates come with realistic ideas of what they need and how much it will cost, for example, to build out an ice cream manufacturing plant.  The program’s business advisors meet weekly with participants to coach them on negotiating, finance and growth strategies.

Besides assisting individual business owners, Goldman Sachs also provided a pivotal $7 million loan in partnership with Shift Capital which helped finance the $60 million deal to buy and upgrade the buildings.

Candidates for the 10,000 Small Businesses program are accepted on a rolling basis at Community College of Philadelphia. The program is open to business owners from across the Greater Philadelphia region. Learn more at http://www.ccp.edu/10KSB and www.10ksbapply.com.

SUPRA Office Solutions, a minority-owned firm, is now one of the City’s fastest growing businesses