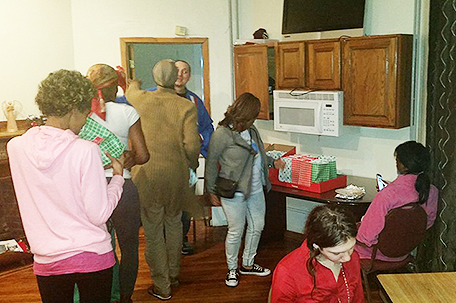 ABOVE PHOTO:  The LGBTQ Home for Hope Shelter  (Photo: Facebook)

The Office of the Sheriff of Philadelphia City & County donated much-needed toiletries to the “LGBTQ Home for Hope Shelter” on Thursday, September 1.

“This shelter receives no consistent funding but continues to do a great job in helping those who are challenged with finding a place of refuge that also provides help in moving forward,” said Sheriff Jewell Williams.”

DSO Austin has been appointed the official liaison between the sheriff’s office and the LBGTQ community, the first such appointment in the more than 300-year history of the Sheriff’s Office.

“Despite receiving no consistent funding, it (the shelter) does a great job of helping to fill a void, and all donations are greatly appreciated and immediately put to use in improving the quality of life of the residents” said DSO Austin, “In this case donations of toiletries and blankets will be satisfying those basic needs most of us take for granted.”

Chief Deputy Kevin Lamb addressed the 38 residents of the home as part of an ongoing effort of community outreach and discussion.

Having the sheriff’s office participate in such worthy projects also helps to create an atmosphere of trust and respect between both entities, said Sheriff Williams.