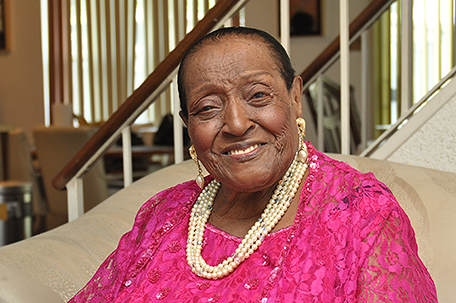 One of the city’s most profound civic leaders, Novella S. Williams, known for her decades of work on behalf of human rights and affirmative advocacy, died in her home on March 20, 2015 surrounded by her loving family and friends. She was 87.

Mrs. Williams served as the founder and president of Citizens for Progress, Inc. (CFP), for over 50 years.  Under her leadership, CFP was regarded as one of the most dynamic human rights organizations in the nation. CFP was driven by its mission to promote and develop affirmative public education and economic improvement for all people with special attention to the African American community. In addition to CFP, Mrs. Williams founded over two dozen other citizen action groups in the areas of education, alcohol and drug abuse prevention, recreation, housing, healthcare, crime prevention and economic development. She was the founder of the West Philadelphia Community Free School, Black Women’s Crusade Against Vice, Crime and Corruption credited with the clean-up and revitalization of the “52nd Street Strip” and was the director of the Philadelphia Anti-Poverty Action Commission Alcoholism Center #11.  As well, she was a former trustee of Lincoln University and the United Way of Southeastern Pennsylvania.

After the death of her eldest daughter, Mrs. Williams founded the Kim Denise Williams Health and Education Foundation and was passionate about enlightening the community on the disparities which exist within healthcare.

Some of her many international experiences include being appointed to the United States Department of Transportation’s Minority Business Resource Center Advisory Board by President Jimmy Carter, Non-Governmental Organization Representative to the United Nations, delegate for the Democratic National Convention (1976), Vice-Chair of the Police Advisory Commission of Philadelphia, Co-Chair and board member of the Urban Affairs Coalition and chief negotiator of the “MOVE” tragedy.

Mrs. Williams was a longtime member of White Rock Baptist Church under the pastorate of Reverend, Dr. William J. Shaw where she enthusiastically supported the church, members and the pastor often being in attendance at the National Baptist Conventions.

A native of Raleigh, North Carolina, Mrs. Williams moved to Philadelphia in 1948 with her husband Thomas Williams (deceased). She is the biological mother of one son, Thomas of Philadelphia, three daughters Michelle and Pamela of Philadelphia and Kim (deceased) and graciously served as surrogate mother after the death of her sister to then toddlers Willis of Bensalem and Charles and Frank (deceased) sharing love and joy in her happy home.

As a leader, lecturer and consultant, Mrs. Williams’ knowledge, skills and talents have been called upon by United States Presidents, governors, mayors and other public officials as well as community leaders.  Her distinguished voice challenging us to seek action against injustice and her incomparable work until just before her death to create change, will be sorely missed.