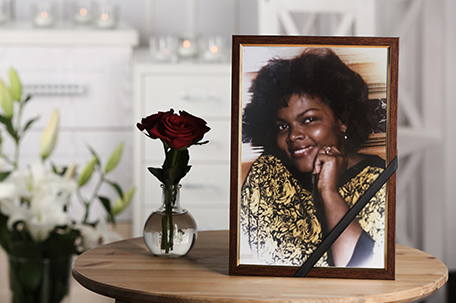 Margaret Bradford was born on September 26, 1949 to the late David Bradford and Maggie Carter Bradford.  Her brother Samuel “Ronnie” Bradford preceded her to glory.

Margaret’s Christian experience began at an early age as a member of the A.M.E Union Church.  She received her formal education in the School District of Philadelphia. She graduated from William Penn High School in June 1967.  Shortly after graduation, Margaret was one of the first African-American Pathology Technicians at the original Metropolitan Hospital in Philadelphia, Pennsylvania.

Margaret met her fiancé Herman J. Matthews, Jr. (Pete) in the summer of ‘67 prior to his departure to the Army.  She married the love of her life in the spring of ‘70.  This loving union of 48 years was blessed with four children, Peter, Mark, Allan, and Heather.

Margaret played an integral part in her husband’s career as the President of AFSCME District Council 33, which represents the blue-collar workers of Philadelphia. “Union leadership is not a

9 to 5 job. Most nights I brought my work home and my wife [was] a willing participant in helping me resolve labor issues” (Pete Matthews).  She was his main advisor. Her feedback and input on subjects from worker rights, pensions, health and welfare and decent wages for city employees were vital in hashing out labor contracts with the City of Philadelphia for the past three decades.  She loved to debate politics with him as she attended many political forums with him.  She was selected from PA AFL-CIO Women’s Committee as a delegate to the 2000 Democratic National Convention.  Over the years as her husband acquired many recognition awards, she was especially proud of the Philadelphia Martin Luther King Jr. Association for Nonviolence Drum Major Award because she was passionate about improving the African-American community.

Margaret was affectionately known as Pumpkin.  She was loved by everyone.  She loved children unconditionally.  Margaret had a love for animals, especially her dogs Bo and Squirt and every dog in the neighborhood.  You would always see her out and about with her dogs riding in the passenger seat. She was an amazing cook, loved fast cars and sewing for loved ones.  She was an avid shopper who had an eye for fashion.  She loved to keep her husband fashionably sharp. Margaret had the ability to talk to strangers, neighbors, families, and friends for hours.  She would always say afterwards, that they could “really talk” when the conversation was always two ways.

Margaret was always mindful of letting God shine in her life and her vast legacy will continue to provide hope and strength, for family members and friends in years to come.  Her professional career was in providing her husband, children, and grandchildren with the love and guidance that will last for a lifetime.  Margaret stressed the importance of education to her grandchildren, as it is reflective in the academic accolades in their high school and college careers. She had multiple jobs to complete; the task was not as easy one.  However, she was able to get everything done.  She was a very strong-willed woman.  Margaret was a very unique person, one of a kind lady.  She would always liven up a room.  She had a heart of gold when it came to others.  Margaret was willing to go out of her way for others. She had a smile like no other, and a laugh that was contagious. 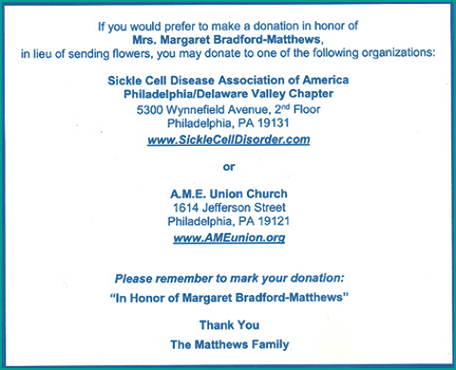