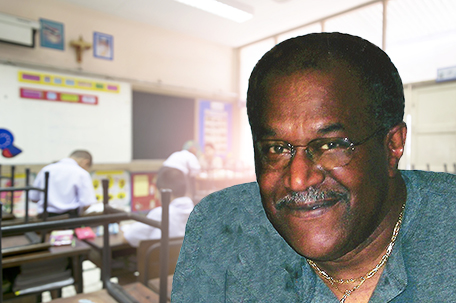 L. Vinmar Lewis, a dedicated mathematics educator died December 29, 2017 after a long illness. He was born June 26, 1944 in Philadelphia to Arnie Mae and Kelly O. Lewis, Sr. Lewis and his two siblings grew up in Germantown and were educated in Philadelphia Public Schools.

A natural athlete, Lewis excelled in sports and played on the football, baseball and basketball teams at Germantown High School. He continued his career in amateur sports at Cheyney State Teachers’ College (now Cheyney University) where he furthered his education after graduating from Germantown in 1962.

Excellence was his motto and sports was not the only area where Lewis excelled. He was a methodical thinker who majored in mathematics and physics at Cheyney where he graduated with a B.A. in 1967.  While matriculating at Cheyney, Lewis became a member of Kappa Alpha Psi Fraternity.

Shortly after graduating college, Lewis began a long career teaching basic and advanced mathematics at St. John Neumann High School in Philadelphia. Known among students as Mr. Lew, he was the only African American instructor at the school for most of his tenure. In addition to teaching math, he developed what he called “The Vinmar Method,” where he taught students life skills – how to communicate effectively and solve problems in a positive manner. Those students included Kevin Dougherty, now a Pennsylvania Supreme Court judge.

“Mr. Lew was there for me in the worst part of my life,” said Fred Calvello, one of his Neumann students. “When you pass it’s not about the people you encountered but the people you reached. When I thought nothing mattered Mr. Lew cared. We all have teachers, but he was my role model.  His family should know how great of a man he was because when I was at my worst he made me better.”

As expected, Lewis excelled at his chosen profession and was promoted to chair of the Mathematics Department where his duties included selecting the textbooks and developing the curriculum. He retired in 2000 after 30 years of service to the Philadelphia Archdiocese.

Lewis also was a businessman. He studied business administration at LaSalle University School of Business in the 1970s and went into real estate. He purchased several rental properties and personally managed and maintained them until his recent illness.

Lewis was known among family and friends as a highly ethical person who truly cared about people. He took good care of his mother during her senior years. Friends said he was the type of person who would be there for you in times of need and personified the saying, “don’t talk about it, be about it!”

“Vinmar had a God-given gift for solving problems,” recalled Dr. Lorraine Poole-Naranjo, a lifelong friend who met Lewis through her brother.  “If he saw something that needed to be done, he did it. We were good friends since I was 19. He was always there for me through the trials and tribulations of my life. Vinmar was a true friend and a gentleman among men who will be greatly missed.”

John B. Kelly school to remain closed on Friday