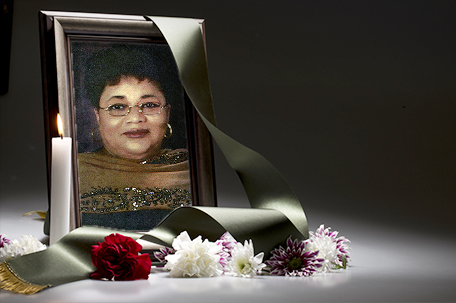 ABOVE PHOTO:  Janet A. Pina

Janet stepped onto the scene, February 5, 1951 in Brownsville, Pennsylvania. She was a cheerleader and graduate of Brownsville Area High School and attended California University of Pennsylvania (“Cal U”). After attending Cal U, Janet moved to Philadelphia where she studied advertising media at Moore College of Art and Design.

While working in Philadelphia, little did she know, working next door, she would meet her future husband and lifetime “bop” partner, Stephen A. Pina. The pair wed on September 27,1975 in Philadelphia. During their union of 43 years, they raised two children, Leslie Janell and Stephen Antonio.

In addition to being a wife and mother, Janet had a passion for community service. During the late 70s and early 80s, Janet worked for the YWCA, was a supporter to civic and political causes including being a Pennsylvania delegate for Jesse Jackson’s presidential campaign and was a charter member of the prestigious Philadelphia Coalition of 100 Black Women.

Her thirst for service led her to work with the Guardian Civic League, where she met John D. Green. In 1987, Janet volunteered and helped champion John to become the first African-American sheriff of Philadelphia County.

After the election, Janet joined the Philadelphia Sheriff’s Office in January 1988 and boy, did she “do her.” In a 6-year span, Janet went from being the director of communications in 1988, and chief of staff in 1990, earning the nickname “Chief” in 1993 and appearing in Jet Magazine as the first African-American woman to be named chief deputy sheriff of a major city.

In her spare time, Janet found time to focus on her entrepreneurial spirits. From flowering and designing to event planning, Janet always did it “large and in charge.” Janet opened up her own floral shop (Liberty Florist) and in retirement, restored furniture and resold them online and at her local shop, “Sit Your Azz Down.”

Janet left civil service for civil processing. Retiring in 2004, she and one of her best friends, Pat West, formed the Tyler Firm. As the chief of her own company, she and West handled writ processing and servicing functions for several city and private entities.

Janet loved her family so much! Every year, Janet hosted family and friends for an epic themed Christmas Eve celebration where she told Santa that her grandchildren did not have to wait till Christmas to open their presents. By 9:00 that night, if not sooner, Xavier was trying on his new Jordans and the girls were playing with karaoke machines and trying on dresses.

Janet’s love for football was overwhelmingly evident. As a vehicle for women to talk about football without the intimidation of men, Janet started Football Divas, a social networking club where women could discuss football and play fantasy football. Her parties were legendary. Bleeding Eagle Green, she would turn out Chickie’s and Petes and various NFL stadiums.

Talk about a bucket list. Janet filled it and kicked it over. She traveled! The Kentucky Derby, The Super Bowl, The Pro Football Hall of Fame, Grand Canyon, Beale Street and several Presidential Inaugurations. She even watched fireworks from the White House lawn and practically visited every casino across the continental U.S.