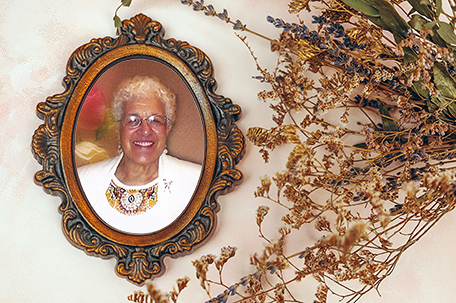 Grace was born on a farm in Louisa County, Virginia on July 17, 1917, the third of six children — three girls and three boys — born to Ada Carr Diggs and Martin Van Diggs. She was the oldest daughter.

Grace moved to Philadelphia at an early age with her family, who wanted to make a better life for themselves. She never forgot her farm values. When asked, she would always say, “I lived so long because of clean living and eating healthy from the farm.”

Grace married Sylvester Stevenson, who adored her and allowed her to be herself. With that freedom of being herself, she was able to accomplish much. She belonged to many social clubs, which allowed her to travel, play tennis, model and become quite adept at playing pinochle. In her later years, she “rubbed a lot of heads.” She only wanted the “best” for a partner. ‘Everyone knew her name as “Amazing Grace.”

Grace’s eye for fashion brought her to Richardson’s Fabric Center, where she worked for a number of years making drapes and curtains. She used much of the extra fabric to help create her beautiful wardrobe.

Grace also had a special skill for sales. Rumor has it that you could see her carrying her products until she accomplished her sales goal. Whether the sale was for a ball, traveling overseas or money for an out-of-town tennis tournament, she made it happen.She was always the top seller whenever tickets needed to be sold, even into her 90s.

Always seeking to improve herself, Grace became a member of Toast Mistresses, where she travelled to Australia, among many other places. Her group won the national competition. She was also a member of Club Vogettes, where she modeled in fashion shows and developed her great sense of style.

Grace is survived by her son, Ralph; seven grandchildren — Lisa, Darren, Haima, Rahad, Rashima, Corey and Christy — and daughter-in-law, Juanita Stevenson, in addition to numerous great-grands, great-great-grands and a host of nieces, nephews, family and friends.

Grace loved people and stayed in touch with everyone. Family and friends were extremely important to her. graceShe loved seeing people happy and made a point of making everyone smile. Grace always looked for the good in others and found it. She truly had a spirit filled with “grace.”

Grace Stevenson “A Life Worth Living”