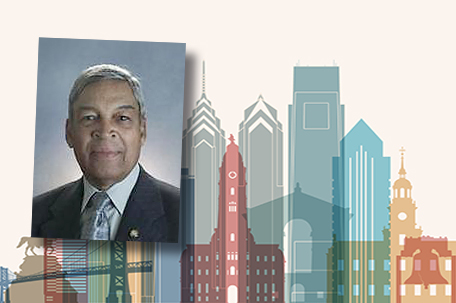 Frank Louis Oliver – a leader in Philadelphia and Pennsylvania politics – made transition Feb. 1, 2018.  Frank was born April 15, 1922, in Philadelphia to James and Lessie Oliver. The family resided in Kensington and later moved to Turner Street in the Brewerytown section of North Philadelphia. Frank and his siblings were educated in the Philadelphia Public School System.

Oliver was an industrious young man who worked several jobs before embarking on his lifelong profession as a public servant. He worked at the Philadelphia Navy Yard and was a supervisor at the Philadelphia Board of Education and the City Controller’s Office.

He had a strong faith and was a longtime member and trustee of Wayland Temple Baptist Church.

In 1950 he met the love of his life – Wilma Wooden.  “Frank was outside playing checkers two doors from my godmother’s house,” recalled his wife Wilma. “He flirted with me, asked my mother could he take me out and the rest is history.”

The couple was married in 1953. To that union was born a daughter, Donna (deceased) and two sons, Frank, Jr. and Shawn.

It was the 1940s when a young Frank Oliver took an interest in his community and politics. His entrance into the world of politics was a humble one – a street worker who rang doorbells urging people to register to vote.

In 1948, he ran for Democratic committeeperson in the 29th Ward where he was raised. Oliver served as chair of the 29th Democratic Ward Committee, eventually became its leader in 1970 and served in that position until his death. Elected to the Pennsylvania House of Representatives in a special election in 1973, he evolved into a seasoned statesman who commanded the respect of his colleagues on both sides of the aisle. Oliver was the first African American to represent the 195th Legislative District which he represented honorably for 37 years.  His ability to cross party lines to negotiate on behalf of his constituents and the city is legendary.

At his retirement, Oliver was Democratic Chair of the important House Health & Human Services Committee and previously served as chair of the House State Government Committee. He was a founding member of the Pennsylvania Legislative Black Caucus (PLBC) and served as its chair. He was also an instrumental member of the Pennsylvania Minority Business Development Authority.

Oliver was humble about his accomplishments – never seeking publicity for his good deeds. As chair of the powerful State Government Committee, he introduced an amendment to the Civil Service Act and the Human Relations Act, which enhanced first amendment freedoms and affirmative action benefits for women and “minority” civil service employees. He was the first to introduce a bill to make the race designation optional on voter registration forms. He also was the first to introduce legislation to make Martin Luther King, Jr.’s birthday a state holiday.

For six years, Oliver introduced and worked on legislation that is now law, which allows mothers convicted of drug offenses to get a second chance to support their families legally with the help of public assistance. He also successfully sponsored legislation that allows alternative payment methods for inmates calling their families in order to lessen the financial impact of collect telephone bills. He is also responsible for the law that denies person-to-person liquor license transfers and one that enhanced penalties for assaulting teachers and school employees.

Under his leadership, the Health & Human Services Committee studied the problem of the lack of supermarkets in urban and underserved communities in Pennsylvania as a health issue. As a result of that study and statewide hearings held by the committee, Gov. Ed Rendell designated $150 million for the development of supermarkets throughout the Commonwealth.

On the local level, Oliver rose to prominence in the City Democratic Committee, becoming first vice chair of the committee and at his death, served as the first African- American treasurer of Philadelphia’s Democratic Party.  He was a shrewd political leader who served as chair of the New Progressive Alliance, a group of African- American ward leaders he organized that had a powerful effect on many elections.

Oliver personified what it meant to be a public servant. He was always accessible to his constituents and loved helping people. Many days people would ring his doorbell to ask for help on an issue. Oliver always listened and did his best to address their issues. Many of his constituents are now gainfully employed because of his help.

One of the things of which he was most proud was his ability to get 73 senatorial scholarships for African Americans. “I got them through working with legislators from other parts of the state. Many of those students became doctors, lawyers and professionals,” he said in an interview. “They made me proud. I don’t know what others did, but I know what I got for my people.”

Oliver alone championed the cause for historic Berean Institute for over 30 years. When he found that Berean was appropriated less than all of the state-related schools in the Commonwealth, he worked to ensure that its appropriations were brought to the same level as the other state-related schools in the budget.  He ensured that Berean’s appropriations were established as a line item in the annual state budget and vowed that he “would not rest” until he got their appropriation to at least $1 million. That was a promise kept!  The last thing he worked on before retiring was focusing on restoring the historic institution’s state funding.

However, Oliver was not all work. He loved playing cards, checkers and going to the movies. Atlantic City was one his favorite places to visit. For years he organized monthly bus trips to A.C. to raise money for his ward. He and Wilma were scheduled to visit Atlantic City the week he passed. Frank Oliver will be truly missed by his community and all who came in contact with him, said friends and family. He was a true champion for the people.

In addition to his daughter Donna, Oliver was predeceased by his parents and siblings James, Jr., William, Massey, Jean and Nora. He is survived by his wife Wilma, sons, Frank, Jr. and Shawn; grandchildren Akeesha, Jamar, Frank III and Shawn, Jr.; great-grandchildren Miracole, Jalen Johnson and Kaci; a niece Patricia Johnson and nephews Francis Horsey and William Horsey.