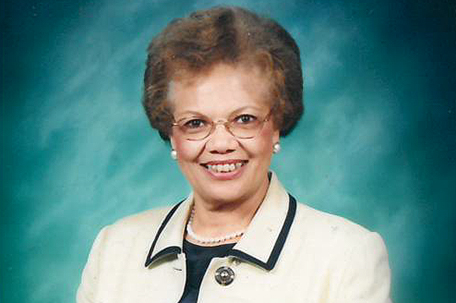 Brenda was born in Philadelphia, PA, the eldest child of the late Paris Luster and Mattie Laura Frazier.  The Frazier Family resided in Atlantic City, N.J. where she was educated and graduated from Atlantic City Senior High School at age 15. Brenda was mentally-gifted and excelled in her educational pursuits, recalled her cousin, Carol Zachary-Smith. She continued her education immediately after high school and earned a B.A.  from Rutgers University–New Brunswick.

After the death of her father, she took responsibility for her mother and two siblings, and moved the family to Chicago. Brenda had a passion for learning and teaching since she was a young girl. While in Chicago, she pursued her dream of becoming a teacher and earned a M. A. in teaching from the University of Chicago where she was a Ford Foundation Fellow. Always a high achiever, Brenda won a Fulbright Fellowship and moved to Spain where she earned a Ph. D. from the University of Madrid and became fluent in several romance languages. This launched a very successful academic career as a professor and administrator at several universities.

While living in Washington, DC, Brenda met and married her late husband, Robert Clemons. To this union was born her only child, Robert Adam Frazier-Clemons – the joy of her life.

Brenda eventually moved to Philadelphia to care for her mother. After a long career in higher education, Brenda felt she could better serve the community through the law and earned a Juris Doctor from Temple University. Her legal expertise was honed while working as a law clerk to Judge Theodore A. McKee in the Court of Common Pleas of Philadelphia, with the Central Intelligence Agency and the U. S. Attorney’s Office Civil Division Legal Intern Collection Unit. Brenda then served as chief legislative aide to Philadelphia City Councilperson Marion Tasco for over 10 years before retiring in 2003 to run for judge in the Court of Common Pleas. She won two terms in 2003 and 2014, finally became a senior judge at the end of her legal career.

Judge Frazier-Clemons was a member of Phi Beta Kappa and Leadership, Inc. She was a past president of the Philadelphia Barristers Association and was a member of the National Bar Association, Philadelphia Bar Association and the American Bar Association. She was continuing legal education coordinator for Temple University’s American Inn Court, an association of lawyers, judges and other legal professionals.  Always involved in the community, she served on several boards including the Pennsylvania Prison Society, St. Barnabas’ Episcopal School, Dr. Warren E. Smith MH/MR Center and Theater International Exchange.

Most of all, said the family, Brenda will always be remembered for her infectious smile that never faded even unto her death and her constant verbal reminder that, “My dear, we all are just doing the best we can.”

Frazier-Clemons was preceded in death by her parents and husband. In addition to her son, she leaves behind a brother, Paris L. Frazier, III; a sister, Gail; nieces Renee Bohus and Jennifer Jones; and a host of relatives and friends.

Private services were held on Oct. 27.