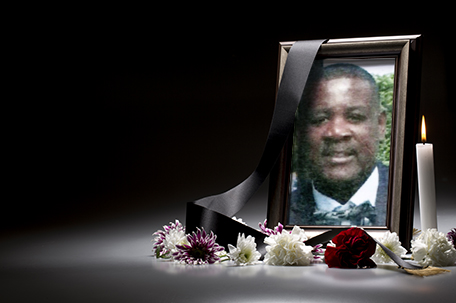 Dixon was bom on August 6, 1964, to the late Henry and Doris Dixon. He was preceded in death by his son, Kendall Elisha Dixon,Jr.  Dixon was the third oldest child of six. He was educated in the Philadelphia public school system and went on to study at Community College of Philadelphia, receiving his Associates Degree in Criminal Justice.

He served in the National Guard for four years. He had numerous places of employment before settling on becoming a Philadelphia police officer, transferring over to the Philadelphia Housing Authority as a police officer. He also worked at Hahnemann Hospital as an environmental service worker, as well as Just Tires using his auto mechanic skills.

“Bone”, as he was affectionately known, was a lover of life who always had a kind word to say and a lending hand to give. He loved spreading the word of God and planting a seed of Christianity.

He enjoyed spending time with his family and had a true bond with his cousin Ryan, who also preceded him in death. He also like spending time with his sisters, Pebbles, with whom he had a special bond, and Kara. The utmost joy of his life was his relationship with his son Najay. Mr. Dixon also enjoyed music, working on cars, taking walks with his two buddies, Pixie and Pedro; and going on fishing trips with his father and brothers.

Mr. Dixon was a die-hard Eagles fan letting everyone know he bled green. When he referred to the Eagles, he called them, “Super Bowl Eagles,” even when they were losing. On Sunday, February 4th, he watched “his Eagles” become Super Bowl champions.

Mr. Dixon’s thirst for knowledge was always great; so he returned to school at Peirce College studying Peer Counseling and was on the verge of starting the Peer Counseling Program with the City of Philadelphia.

In 2012, Mr. Dixon joined Sharon Baptist Church under the leadership of Bishop Keith W. Reed, Sr., where he served on the usher’s ministry.