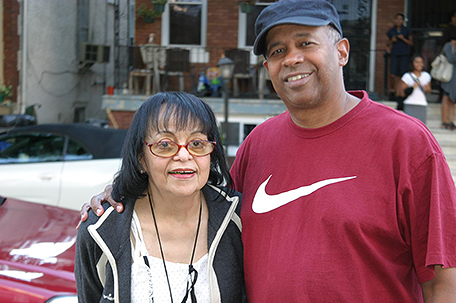 Ernestine I. Grey was born on September 23, 1933 in Philadelphia, PA. She was the daughter of the late Ernest and Jessie Robinson.

Mrs. Grey attended the Public Schools of Philadelphia PA. and graduated with honors from Philadelphia High School for Girls in 1951. From there her first Job was at John Wanamaker Department Store.

In 1952, Mrs. Grey was united in Holy Matrimony to the late Al Grey. From there she was blessed with four beautiful sons, Albert, Ernest, Michael, Robert.

Ernestine aka, “Tina,” worked at a number of jobs, Spiegel Catalog and Get Set Day School. In the early 1980’s, she was asked by the late David P. Richardson to become Committee Woman of the 24th Division, 59th Ward and later ran to be Judge of Election of the same Division and won. After a few years, she had to quit those jobs because she landed a new job with the City of Philadelphia.  She worked in a few departments and made many friends; she was loved by her coworkers. She stayed in close contact and attended many events with them after retirement.

After retirement, Mrs Grey went back to politics and became Committee Woman again in the 24th Division for Ward Leader Donna Reed Miller. She was great in politics, helping such politicians as Cindy Bass, Cherelle Parker and current Pennsylvania State Representative Steve Kinsey and many more until her death.

‘Tina’ was petite and enjoyed getting dressed to the tee! She loved going out to many events, plays and all types of music events, especially her grandchildren, Alex and Alyssa’s school events. I ina loved her Jour sons, her boys met the world to her. Her boys as men, she wouldJix dinner and call everyone up and say, “you better come get this good food right now.” Or she would see some clothes that she thought would look good on her boys and only from Macy’s, the best she would buy.

Ernestine Grey is survived by her four sons; one sister; her daughter-in-law; many grandchildren and great-grandchildren; and a host of cousins and friends.