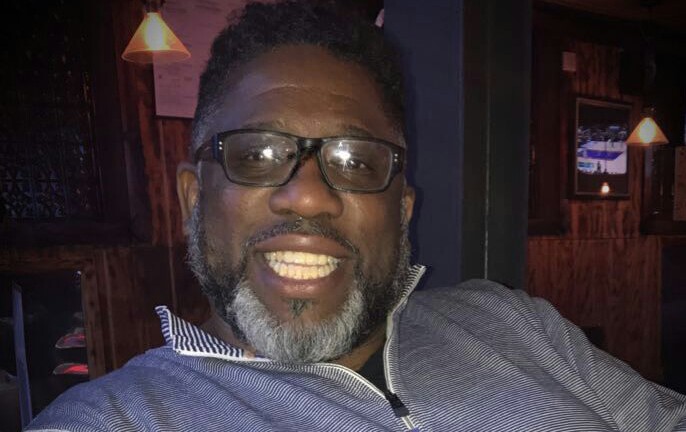 ABOVE PHOTO:  Theodore A. Johnson

Popular businessman and entrepreneur Theodore A. Johnson, 53,  passed away on Wednesday October 18, 2017.  He was remembered yesterday by family, friends and loved ones during services at Deliverance Baptist Church in North Philadelphia.

Theodore A. Johnson, also known as “Teddy”, was born March 7, 1964 to Mable and Richard Johnson in Philadelphia, PA. He was the youngest of three children, Richard Johnson Jr. and Jackie Johnson.  He grew up in North Philadelphia on the 3000 block of 26th St. He graduated from Dobbins High School, then received his undergraduat 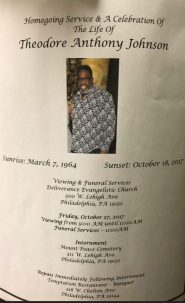 e degree from Delaware State University. While studying for his undergraduate degree, he proudly pledged Omega Psi Phi Fraternity, Inc. where he formed a bond with his line brothers and met lifetime friends. He was given the named “Pujo” by his frat brothers. He returned to school to obtain his master’s degree.

Johnson became an entrepreneur at a young age. Everyone knew he was a self-starter and took an interest in business management. His father, Jazz, handed down his legacy to Johnson which developed his passion of owning and managing real estate properties. During his career, Johnson invested in his own successful business called EZ Flow Mortgage from 2001 to 2007. This unique talent Johnson had was truly amazing, and was an inspiration to many young entrepreneurs.

One of Johnson’s greatest accomplishments — one that he often mentioned was having a family. His daughters, Teddi and Antonia (Toni) were his world. As most children do, they drove him crazy, but he would do anything for them. He was steadfast in providing them with the tools necessary to maneuver through anything that they would face in life. Johnson was a huge supporter of Historical Black Colleges & Universities (HBCU) and cherished the academic and social experience that he had at his alma mater. This enriched collegiate experience largely influenced the girls’ decisions to attend HBCUs. He always expressed his admiration for his daughters’ drive for success. His proudest moments were witnessing their accomplishments in school and to see them graduate from college.

If you knew Teddy Johnson, you knew he was always the life of the party. He always wanted to have a good time, and could turn any situation into a positive one. Through his charisma and full of life personality, he met his current wife and the love of his life, Karon Hawthorne. Teddy and Karon were united in matrimony on October 31, 2014. The two spent the past few years together traveling, hosting parties, celebrating life, and making his final years nothing short of amazing.

Teddy leaves to cherish, honor and protect his memory, his wife, Karon Hawthorne-Johnson; two daughters, Teddi and Antonia Johnson from a previous union with Yolanda Johnson; one son, Kyron; a sister, Jacqueline Johnson; a mother-in-law, Esther Hawthorne, two sisters-in-law, Shirley Johnson and Patrice Hawthorne; a host of nieces and great friends.  Teddy will be sorely missed by all especially his Omega line and fraternity brothers.  Teddy was preceded in death by his parents and older brother, Richard.

Theodore was laid to rest at Mount Peace Cemetery at 3111 W. Lehigh Avenue on Friday Oct. 27