Obituary: Bennie Swans, 70, longtime Philadelphia anti-violence activist. (The SUN will have livestream of Sep. 25 service on our Facebook page at 10 a.m.) 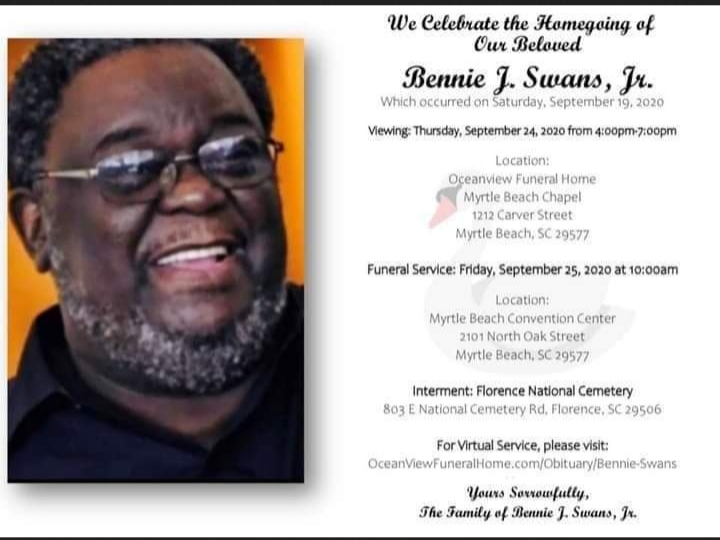 9/25, 10 a.m .–View . The SUN will have livestream of Sep. 25 service live on our Facebook page beginning at 10 a.m. facebook.com/philadelphiasundaysun

Bennie was educated in the Philadelphia School District and graduated from Edward T. Bok Vocational High School.  From there, he was drafted by the United States Army to fight in the Vietnam War where he valiantly served his country earning three Silver Stars, two Bronze Stars and a Purple Heart before finally being honorably discharged. Bennie would later go on to earn a bachelor’s degree in Public Administration from Antioch University.

Bennie has worked in many positions upon his return from the Vietnam War including the Safe Streets Initiative, Vision Quest, The School District of Philadelphia, and The Crisis Intervention Network.

Bennie realized early in his life that he had a calling and that calling was to serve the communities of Philadelphia and abroad.  He quickly rose from volunteer to director of the Safe Streets Initiative.  Bennie also used his profound knowledge and understanding of gangs, street violence and the art of war along with the assistance of the late Senator Arlen Spector and former probation officer, Tom Reid to start The Crisis Intervention Network where he was the Founder and President.  Having experienced both sides of the issue, Bennie was the perfect person to head the fight against gang violence.  Bennie was responsible for bringing together a myriad of people from all walks of life to form Crisis Teams that would go on to serve the city by mediating disputes with rival gangs and preventing violence before it began.  Despite being told that they were “too big for their britches” the program was a success and the model spread to other major cities such as Chicago and Los Angeles.  Bennie even took on the challenge of heading a Community Youth Service Project in Los Angeles, under the LA City Probation office.

Bennie wed his long-time sweetheart, Marcella and when her mother fell ill, they moved to Kingstree, SC to help care for her.  There, Bennie would continue his life’s calling by working on several projects like the Salters Prison Project which helped to create jobs in the area for minority contractors. After two years in Kingstree, Bennie moved his family to Myrtle Beach, SC where he continued to volunteer to better his community.  One of his biggest accomplishments was the formation of the Martin Luther King, Jr. Celebration.  Bennie successfully lobbied the Myrtle Beach City Council for an official MLK day holiday. Bennie was truly a man of the people.

On Saturday, September 19, 2020, Bennie J. Swans, Jr. made is ascension into heaven.  He has certainly lived a life filled with love, laughter, wins, losses, family, friends and servitude. Although his time here on earth is done, his heavenly journey has just begun. We know that Bennie will be watching over not only his loved ones but all of us. His one wish was that we would all be better so that we could do better.

Bennie Swans of Carolina Forest in Myrtle Beach passed away Saturday, September 19, 2020.  A Celebration of Bennie’s Life will be held 10:00 a.m. Friday, September 25th, 2020 at the Myrtle Beach Convention Center.  Burial will be at Florence National Cemetery at 2:00 PM Friday with Full Military Honors.  The Ocean View Funeral Home of Myrtle Beach is in charge of arrangements.