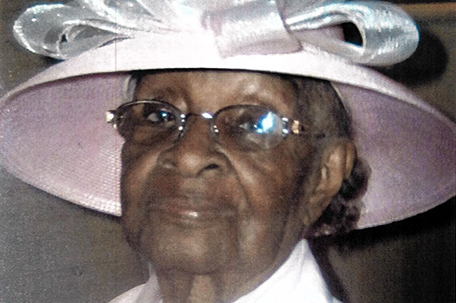 Annie Brown was born to Idella Hemmingway and William McGee in Kingstree, SC on May 17, 1916. The oldest of two children sister (Janie Ford) predeceased. She was raised by John and Susan Nesmith with half siblings Johnny Nesmith and Willa Mae Davis in Williamsburg County. She attended school up to the 8th grade where she met her husband Arthur Brown and married in 1938; from this union ten children were born.

Annie and Arthur lived and worked in various factories for many years in Durham, NC before migrating to Philadelphia, Pa. in 1950. Here she became a domestic engineer for several prominent Jewish and Italian families where she raised her family and other people children while living in the Strawberry Mansion Neighborhood.

Aunt Annie, Mrs. Brown, and Mother Brown she was called as the reigning evangelist and missionary throughout her life’s journey. As an able-bodied senior herself, she was a supporter of other senior citizen by driving them to the doctors, taking them shopping and to church. She held the position as the Mother of former church Starlight Holiness in North Philly.

Since 2008, she met with some health challenges and became a resident of the Maplewood Nursing Facility in Germantown. She continued teaching, preaching, and sharing God’s Word to her nursing staff and became a stallworth figure to many. The staff joined us to celebrate her 100th birthday party this past June 2016.

Our mother was so loving and giving and understanding as well as comical. There was always an element of surprise with laughter. A devoted wife, mother, grandma, sister, auntie, friend, neighbor; a devout Christian woman true to her calling and her gifts (counseling and mentoring) will always reign in our lives as the royal queen she exhibited. She took care of her “village”: family, church and community. Her legacy leaves all of us with Jeramiah 1:5, songs “I Know It Was The Blood & “Ninety-Nine 1/2 Won’t Do” and so many more precious memories.

On Tuesday October 4, 2016 11:34 am Our Heavenly Father delightfully called her home to reign with Him. She will be missed by all who knew and loved her.

Special thanks to: Rose Williams and Lynda Kyem (surrogate daughters) and especially to Theresa Hawkins her god-daughter.

(Submitted by the family of Annie Brown.)