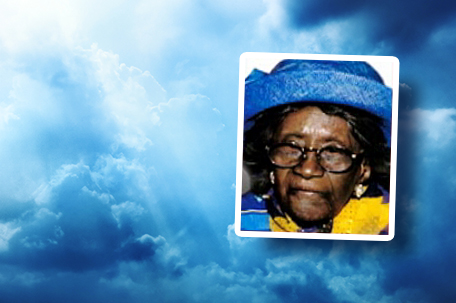 Funeral services for Mrs. Anna Lois Berrian Henderson will take place Sunday, July 13, 2014 at Holy Temple Church Of God In Christ, 334 North 60th Street (60th & Callowhill).  The viewing will start from 4PM to 6PM and the service will start promptly at 6 PM. The repast will also take place at the church and the burial service will be for the family the next morning.  Mrs. Henderson died on July 1, 2014 at the age of 114 which made her Philadelphia’s oldest resident for which she was celebrated at the Mayor’s Annual Centenarians’ Luncheon in 2008.

On March 5, 2013, Anna Lois Berrian Henderson celebrated her 113th birthday. She was born to the late Isaac and Jennie Thomas Berrian in Washington County, Georgia.   She attended the public school there and was quite enthusiastic about learning. Anna was a serious student, and was able to handle her studies with ease.

At an early age, she and her family attended the Smith Grove Baptist Church, where she was saved and baptized. When Anna was very young, her father began reading the Bible and discussing the importance of God in their lives. Anna was fascinated and always wanted to know more.

In approximately 1915, Anna and her family joined the newly founded Pentecostal movement. She remembers Bishop Mason, the overseer of the Church of God In Christ, coming to preach at their church.

During the “great migration” of the 1920s, Anna’s father urged her to go north. She did so reluctantly because she truly loved the south. Anna relocated to Philadelphia and stayed at the home of Mrs. Sophie Hodges until the rest of her family arrived. Anna found employment in the garment industry and later at the Hahneman Hospital.

In 1925, Anna married her childhood friend, the late, Rembert Henderson.  To their union eight children were born with one adoption. The family resided in North Philadelphia until 1941 and then moved to West Philadelphia.

Mrs. Henderson continued to go to church on Sunday at Holy Temple Church of God and Christ at 338 North 60th Street, where she’ was a member since the 1940’s.

Mrs. Henderson was an avid baseball fan, her favorite team was the Atlanta Braves. She was delighted to accompany her grandchildren and great grandchildren to whatever sports event they participate. proud of her holiday deep dish pie recipe, and in her most recent trip to the polls, she voted in November 2012 for President Barack Obama as she did in 2008. Her first trip to the polls was a vote for President (Franklin Delano) Roosevelt. She stayed active and on the go in the company of her surviving children and grandchildren. She attributed her long life to her faith in God through all life’s victories and tests.

Another interest of Mrs. Henderson’s was politics. This interest was first inspired by the candidacy of Franklin D. Roosevelt. Since that time she has followed the political issues of the day and continues to participate in the political process.  Anna even possesses Happy Birthday cards from former President Bill Clinton and Secretary Of State Hillary Clinton.

Having been born at the dawn of the century in the rural south and living to the present, Mrs. Henderson had witnessed many historical events, i.e. the first World Series in 1903, the World’s Fair in 1904, the birth of the NAACP which was founded in 1910, the Spanish Influenza Pandemic of 1917, in which 500,000 Americans and 20 million peopled died worldwide, World Wars I and II, the dropping of the Atomic Bomb, the establishment of the Tuskegee Airmen, the Korean Conflict, and the subsequent integration of the Armed Services, the Great Depression, the Civil Rights Movement, the tragic events of Sept. 11th and the conflicts in the Middle East.  Not only has she survived to see these once in a lifetime events, but also with God’s help prospered through them. She’s seen the transition from horse and buggy to automobiles, to supersonic jet planes, to spaceships and satellites, computers, cell phones DVD’s and I-Pods.  She took her first flight at the age of 90, after much anticipation, and to her surprise, she thoroughly enjoyed it. Not to rest on her laurels, Anna took her first cruise at age 93.